I love celebrating and learning about different holidays and traditions while traveling to other countries.

One of my favorites was celebrating Dia de los Muertos in Mexico, and Semana Santa in Antigua.

Here in Nicaragua we were able to observe La Purísima and La Griteria (literally meaning 'the purity' and 'the outcry, shouting, uproar)… otherwise known as 'the festival of the virgin'.

Imagine ‘La Purísima’ like this: a richly decorated altar is placed in a corner of a family house, with a statue of the Virgin Mary‘s image. In front of this altar, a lot of chairs are arranged, that will be occupied by family members, friends, and neighbors invited by the house owners to celebrate its ‘Purísima’. Once all the guests arrive, the celebration starts with prayers to the virgin, but these are alternated with traditional songs. All the assistants accompany with whistles, tambourines and other instruments. While this takes place inside the house, outside some family members fire rockets and the so called ‘caraga cerrada’, (firecrackers) that contribute a lot to the boisterous celebration. Meanwhile the singings and prayers take place, the host distributes to his/her guests fruits, traditional sweets, caramels, traditional drinks, sugar-cane and many other gifts. (ViaNica.com)

La Gríteria is closely related. It's celebrated the night before La Purísima (kind of like Christmas Eve), and is a loud, boisterous event:

At 6PM every December 7th, a common yell is heard in different cathedrals and churches: Quién causa tanta alegría? (Who causes so much happiness?). This is how another ancient tradition starts along with the massive response ‘La Concepción de María’ (Mary’s Conception).

At that time, in cities and towns people start exploding fireworks and firecrackers. In the biggest cities, it gets so noisy that any uninformed tourist might think that a war has just started in Nicaragua. At midnight, firecrackers explode once again (the same happens at 6AM and 12PM, but on a smaller scale).

...thousands of Nicaraguans go to the streets to ‘shout’ to the virgin (the word gritería could be translated as ‘shouting’), which means visiting each altar (set up for La Purísima) and singing to the virgin Maria. This is basically how it is done: people hang around in groups, stop at an altar, intone traditional songs (the same as in ‘La Purísima’), house owners give fruits, candies, toys, instruments to make noise, natural drinks, and other type of gifts; finally, they move on to another altar. House owners who have placed altars wait until another group comes to sing. This is how ‘La Gritería’ is celebrated, lasting until the house owners have no more gifts to give away or until streets have no more singers. (ViaNica.com)

Watching it in action kind of reminded me of Halloweeen 'trick-or-treating'. With yummy food.

These big 'gigantonas' represent the oppression of the Spanish conquest. "She represents the big white Spanish woman with elegance and power." [1]

'El enano cabezon' symbolizes the underestimated mestizo (slave). His big 'bobble' head represents the mocking he would do behind the big bosses back.

And I don't know if it was because it was around Christmas/Griteria time, or if it's always like this, but the Nicaraguans in León sell TONS of apples… very expensive imported apples. Is this a special holiday treat?

Even in the produce section at the grocery store the largest selection is apples! More than $1 each. 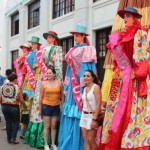 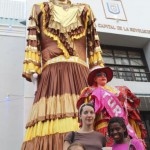 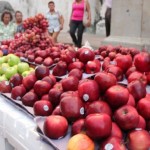 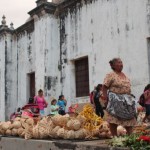 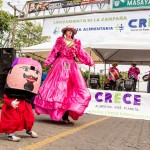 This photo comes from Oxfam 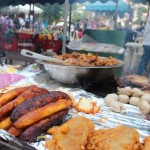 When it gets dark, the music is pumping and the fireworks start. 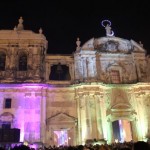 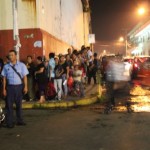 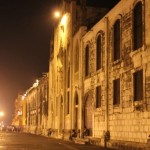 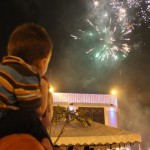 Then the 'yelling' begins (hence the name 'griteria'). Groups of families and youth run around from house to house (where alters are decorated to the Virgin Mary) and the families at home give out gifts or treats to the running and yelling visitors.

What's your favorite or most interesting holiday that you've celebrated abroad?