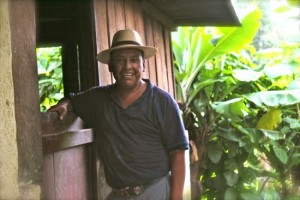 What was the last thing you spent $129 on? Groceries? Your cell phone bill? Maybe a new toy or gadget.

See the man in this picture to the right? We personally know him, we call him Presidente -- humble, honest, hard working -- and $129 (1,000 quetzales or Q) is about how much he earned working over the last two months.

Earlier this year he planted about 1,000 tomato plans. Come harvest time, he can earn approximately Q15,000 when he sells them. (That's roughly $1935 -- enough to last his family for most of the year).

But then disaster struck.

Early one Monday morning, he hiked up to his wife's property (we must be clear on that -- it belongs to his wife, not him 😉 ), to water and check on his precious crop.

To his utter distress, nearly 75% of his tomato plants were infected with a fungus -- ruined. His $1935 salary for entire year, nearly gone.

Now we back track a few months to when we first arrived in Panajachel, Guatemala. 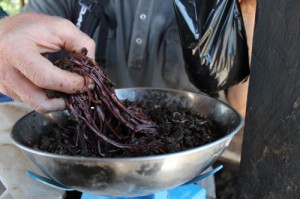 My husband has a one-track mind. When he gets an idea in his head it consumes him. So when he had the idea that we should homestead in Guatemala, he and his friend Greg (yes, they both have the same name, it gets confusing. We call them Uno and Dos) -- so Uno and Dos spent months studying the topic -- we looked into buying land, animal husbandry (rabbits, chickens, etc), vermicomposting, aquaponics, permaculture, square foot gardening, solar power, composting toilets, on and on and on -- they became (almost) experts. Anyway, they know a lot. 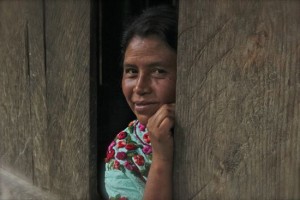 So when we eventually heard about the Presidente's plight -- a good friend of ours, someone we respect, who is smart and works very, very hard -- we were hit with the brilliant idea of homesteading on the land he already owns (wait, the land his wife owns, remember 😉 That's her to the right.)

With the help of very generous friends, have already done a couple of humanitarian projects for him -- most recently a solar heated water system.

Before that it was a smoke-reducing stove and a composting toilet.

On every occasion, we initiated, gave him the ideas and the capital, and he finished up the project or worked out any 'bugs'.

He's proven what we've believed for some time:

What many 'poor' people lack is not money or 'stuff' -- they lack ideas and capital. They don't have access to books or YouTube, or a small business loan from the bank.

He's also proven that we can trust him. That's important.

A project like this won't work with just anyone. It takes the right personality. He has it.

So because of that trust, we introduced the idea of homesteading to him, and asked him to let us know what he thought. This is a BIG idea. It's a big project. And it won't produce an income right away, it takes time. 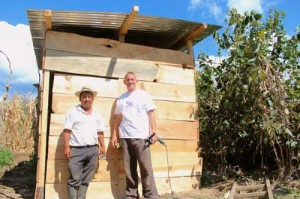 In the long run, he and his family will be better off... it's just a matter of 'how do we eat until then'.

The last few months have been tough for them. They never complain, but after a few chats, and a visit to their house, it's clear that they're pretty much living on corn tortillas and a few beans.

Because of hard times, he has been considering taking a job across the lake -- which would pay him Q3,000 per month ($387) -- but he would have to live there 24/7, away from his family and his church work. With any luck, we can produce an income larger than that with this project.

Over the past few weeks, he mulled over our idea (and discussed it with his wife, after all, it's her land), then he gave us their answer (through tear filled eyes):

Then, I learned Spanish. I learned to read. I found God. I found the church. I tried to do what was right. I began to be respected. I wanted to provide an education for my children and give them a better life than I had.

I always dreamed of enclosing [her] property (to prevent theft), having some animals, and making more money. It is tough sometimes when you do not have enough to eat, and you cannot give your children what they need (he has two children serving missions for his church, and another about to leave.)

Doing this [homesteading project] has been one of my dreams. I had a vision of doing it, but I pushed it away because I did not know how it could happen. I do not know why you are helping us, but I am very, very grateful. It may not be very much money to you, but to us it is a lot.

I want to show you that I will work hard, that I will sweat, and I will do my part, because of what you are doing for us."

You know that look that a child has on Christmas morning -- joy and excitement that is shining out through the eyes, and overflowing into a gigantic ear-to-ear smile?

That's the look they had as we discussed plans for fulfilling their dream.

Here's what we've come up with: 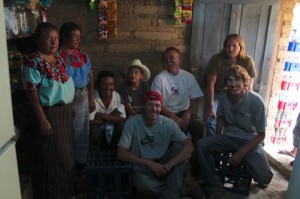 The fastest way to earning an income will come from purchasing approximately 50 mature laying hens. With that many hens, she can sell around 30 eggs a day, (she has a little tienda -- see photo on the left -- on the property where she sells eggs and produce. Currently, she travels down to Panajachel, buys eggs and produce, then carries it up to her store -- a lengthy and costly process).

With her own eggs (and her own produce -- see below), the profit margin will be much higher, about Q1 per egg -- earning approximately Q900 per month just from eggs! (This is almost as much as he earned working in the last two months!!)

They have already been selling meat chickens in their store, but they have to go to Godinez to buy them. He figures he could sell 50 meat chickens per month at Q50 profit (after initial cost and food) -- earning approximately Q2500 a month.

He already had a large hole dug in his yard, which we expanded and lined with plastic to create a fish pond which can hold about 200 tilapia.

After the initial set up cost (buying the fish), he can feed the fish from the vermicomposting worms (aka free), then sell them after 5 months for Q20 each.

The fish will continue to reproduce, with the goal to be able to sell about 25 fish per month. At Q20 a fish, that's about Q500 a month. (Plus an additional nutrient source in their diet!)

Rabbits will follow a similar model. The meat sells for Q35 a pound (an average rabbit weighs about 4+ pounds). They breed like rabbits ;), and he could sell up to 15 a month.

Rabbits have a higher start-up cost, and cost more to feed.

According to our friend and expert farmer, Shayn Bowler from Utah Natural Meat, "Pigs are one of the best animals to raise for meat. They produce lots of it, quickly, and have large litters." 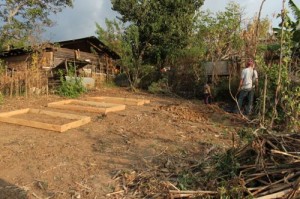 Vegetable Harvesting -- food for the family, + icing on the cake

Using the techniques found in Square Foot Gardening (and those used by the Urban Homestead), we're going to use his land more efficiently, and produce up to four times as much.

Currently they grow beans, corn, and tomatoes. Now they'll be able to grow those crops, plus a much larger variety -- more than enough to feed their family, and to sell at her little on-site tienda.

If you choose to donate, please let us know if you wish to remain anonymous.

Buying even one chicken will make a difference! Every single dollar will go directly to the project. Promise.

Thanks for your support!

Here's where the 'Perpetual' part comes in...

The thing we love about this project is that it's 'alive'. It's more than just handing somebody a bag of canned food. It's dynamic, growing, changing, expanding -- life-altering and affecting generations!

As part of the deal, it will spread to others. As Presidente increases his animals and his income, he'll then pay back into the 'fund', so that it can be shared with someone else.

So when the rabbits and pigs have babies, they go back into the fund to be given to someone else, or sold so the money can be used for another project. Beautiful, isn't it?

And here's where accountability comes in...

Tuesday morning, we trekked up to his... excuse me, her property in Patanatic and started working.

We began on the chicken house, the fish pond, clearing land and building gardening boxes. You can see the progress we made by watching the videos in the posts below (and learn more than you probably wanted to know about vermicomposting and square foot gardening).

I can't even tell you how excited I am about this project! I feel giddy, like a kid at Christmas!!

Every step of the way, we'll be recording progress -- through photos and video -- and sharing it with you. We want to give you the opportunity to participate in this very exciting undertaking, and we promise that every dollar you donate will go directly to implementation.

We'll post all the photos and video here on the blog, as well as the names of donors (unless you wish to remain anonymous.)

Thanks again for being a part of it!

We received a great response to this project. Thanks for all your donations!

You can read more about this project here: