Nice loooong showers, with water so hot it's almost scalding.

For me, it's like a meditation, a special treat, time to myself away from the hustle and bustle of family life.

I can't even imagine what it would be like to go your entire life without having a nice, long, HOT shower...

Yes, I'm spoiled rotten, because this is a living reality for many, many people, and for one very special family in particular.

This family is the 'salt of the earth', the kind of humble, honest, sincere individuals that you just don't find anymore.

With the help of many other wonderful friends, we've already installed a smoke-reducing stove, making their old smoke-filling stove obsolete (and saving their lungs and their eyes in the process). 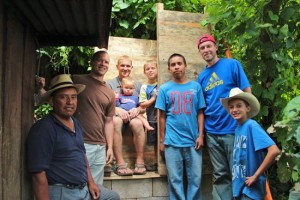 Next it was a composting toilet next to the house (a novel idea) since the old 'bathroom' that they've been using for the past 25 years was down the hill, and only about 4 feet tall. (They said now they have to put a lock on the bathroom door when they're gone, or the neighbors come and use it -- which isn't a problem except that they throw garbage in it.)

This time, a solar hot water system was installed. So even though they shower outside next to the pila, at the same place where they wash their dishes and do their laundry, at least the water will actually be warm -- an experience they've never had before. 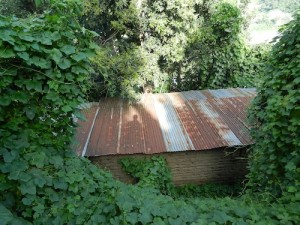 (I did not actually go to participate in this project, so the photos below are from our friend Greg Jensen of Mayan Running Adventure.)

This is where the solar system will be installed -- it's the roof of their house, and gets full sunlight between around noon and four or five. 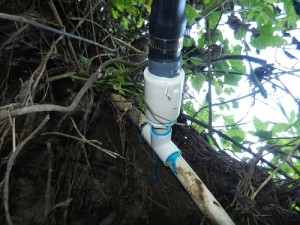 First they connected the water from where it comes down from the mountain (they get their water from a high-pressured mountain spring -- it is very clean and provides an unlimited supply).

Then they connected the black hosing, which will coil around on the roof, and absorb the heat from the sun.

As the water flows through the heated pipes, it heats the water.

Now here's where a few hiccups come into play... when my hubby went to the hardware store to buy the black pipe needed, despite his clear instructions, the store gave him the wrong piping. 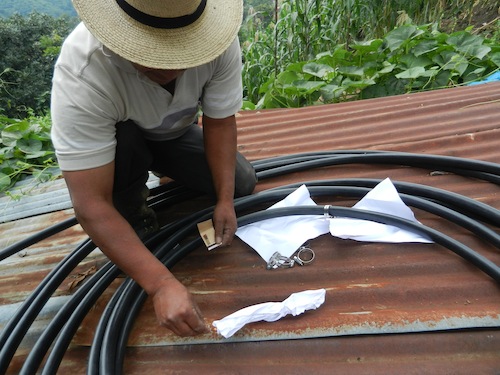 So when they hooked it up, and turned on the water, the pipes burst because of the high pressure (they thought it might be simply because they had so much water pressure, but as they found out later, they'd actually been given electrical piping).

Once they resolved this little issue (which was a few days later), they exchanged the pipe, and gave it to presidente (that's what we call him). Now that he had the idea of how it was supposed to work, he installed it all himself. (That's why we love this guy! Initiative and ingenuity!) 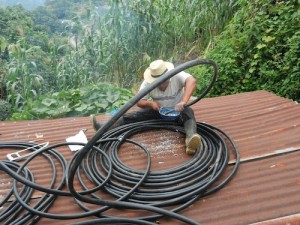 With just the idea firmly in his head of something that he had never considered or heard of before, (and the necessary resources) he was able to single-handedly install a solar hot water system on his home, thus greatly improving the quality of life for his family.

That's why we'll continue to preach that 'poor' people don't need us to give them food or clothes or things like that.

What they need and want is ideas -- the kind of ideas that you have access to on a regular basis that you just take for granted, like books and YouTube videos and Google -- they need ideas and they need capital, and with those two things, they can take themselves out of poverty. 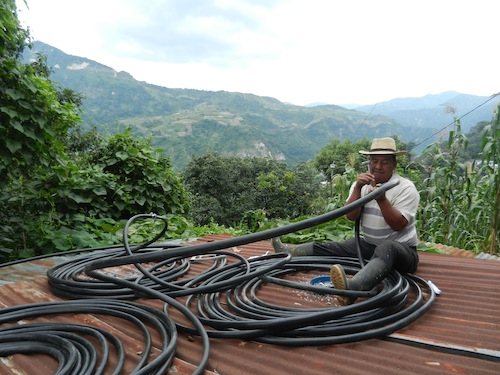 So, how is the hot water working out?

Well, of course they love it.

He has more than enough hot water to take a full shower (not the kind I take of course). And sometimes it's so hot it's almost scalding.

Because of the modest nature of Guatemalan women, they usually fill up a bucket of cold water, then many will heat it on the stove and then do a bucket bath inside. This requires a lot of effort (carrying leña - aka firewood - up the mountain), and uses lots of resources (chopping down trees).

Now, all she does is fill up a bucket of HOT water and take it inside. Lots of time and energy saved! (And forests.)

PLUS, the presidente has helped one other person so far install a solar hot water system on his house... the ideas are spreading already!! That's the result of a great humanitarian project!!

Check out the next BIG project that is literally, generationally,  LIFE-CHANGING. We call it the Perpetual Self-Reliance Fund.

We have been teaching the son of this family how to read and write in English, as well as to use a computer (he's helping us with SEO, YouTube videos, etc.) to help him gain the skills he needs to have an 'office' job -- his dream (instead of working in the fields). Thanks for the donors to that project!

A special thanks to the following donors: