Last time they wouldn't let us in.

We tried to visit their country. But they told us we were 'illegals', and wouldn't let us come in.

So we went back to Guatemala, then the next time we renewed our visa's in Mexico, we did it the right way.

Now we're leaving Guatemala... for good... planning to rent a house in El Salvador, but hoping we'd 'done things right' and that they will let us in this time.

We'd spent the morning doing some extreme bungee, so it was getting later as we approached to the border (we knew it was close because of the 'border helpers' who started yelling and waving us down)... We weren't concerned about the hour, until we saw an unceasing line of semi-trucks... while we were still miles out from the customs buildings.

Then a couple of helpers on a motorcycle motioned for us to follow them... on the wrong side of the road. We did. For 2-3 miles we drove past semi after semi after semi, dodging oncoming traffic by driving on the shoulder (what little bit of shoulder there was.) This is great! Usually these guys are just a pain, but this time they're really helpful. 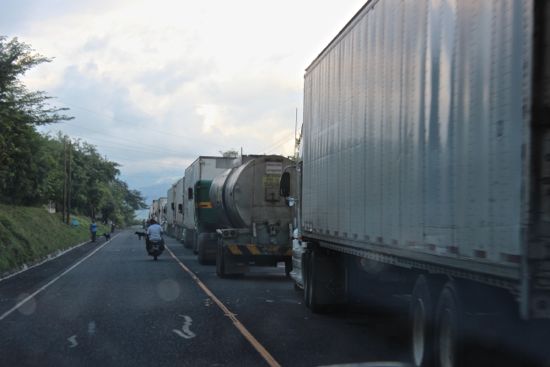 Reaching the customs building for Guatemala, we parked and Greg did the necessary paperwork. It was fairly fast, and we were ready to cross the bridge into El Salvador in less than an hour.

But there were more semis... blocking the bridge, lined up all the way across into El Salvador. We could be waiting hours just to get across.

Our 'helper' came to the rescue again. Maneuvering us across traffic, he led the way on foot as we crossed the bridge on the oncoming traffic shoulder, squeezing past semis headed into Guatemala. Just as it was starting to get dark, we reached El Salvador customs and could begin our paperwork.

The kids and I waited in the car (except for when they wanted us all to come to the window so they could check our passport photos with our faces.) 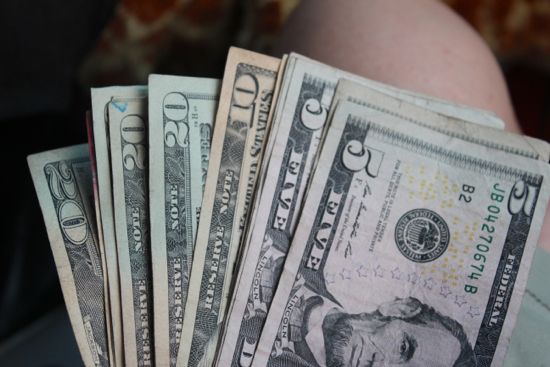 We exchanged our Quetzales for Dollars... the U.S. dollar is the currency used in El Salvador.

Finally getting an update, it seems the person who is supposed to inspect our truck is nowhere to be found. Once she finally does arrive, she fills out the necessary paperwork (twice, by hand), then sends Greg to another building where they fill out the paperwork three times, by hand...

Three hours after arriving at the Guatemala border, we're finally on our way. But now we're tired. It's late. Our 'helper' has found us a nice hotel room right in town (great, we get to stay in a border town... notoriously sketchy.) It has two beds, internet and TV for only $30... so I guess we'll stay.

I should have asked to see the room first.

One bed was pushed up into the corner, blocking a door that led out into the street. The other bed was just a 'mattress' (if you could call it that) leaning up against the wall. The toilet had no seat. We had to provide our own toilet paper. The water wouldn't come on (we had to ask them to turn it on.) And right away Greg killed a huge cockroach. We never could connect to the internet.

I'm not against staying in places like that when we have to... which we did. I just thought $30 seemed like a rip off for such a 'nice' room . But there was nothing to do. We all took cold bucket showers, watched some cartoons, and then went to bed (I slept away from the wall, just in case cockroaches wanted to crawl on me.)

We made it into El Salvador. That's what mattered. And tomorrow was a new day. Maybe we'd even find a house to rent, someplace where I could have this baby. (At least that's what we hoped would happen...)

Have you had a similar border crossing or 'roach hotel' experience?