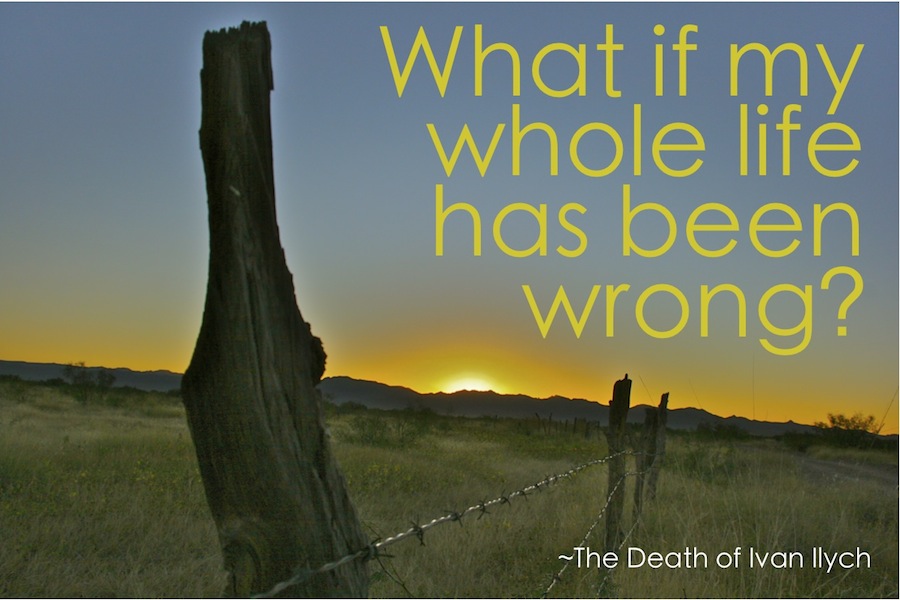 We talked about doing it. Someday.

Maybe when the kids were older, and we were closer to retirement. Maybe when we had enough money in the bank, and could 'afford' something like that. Then we would do it. Then we would travel with our kids. Live abroad. Learn another language (for me and the kids. Greg already knew Spanish.)

But something started to happen. That desire began to grow, like a fire that's fed by a gentle, but steady blow. It wakened when Greg took a humanitarian trip to Peru, leaving me with our three young children (the youngest just 2 weeks old), and longing to share the adventure with him.

The flame swelled when he took a back-packing trip to Guatemala a year later. "Next time I'm going with you!" I declared.

One night, not long after, he laid on the floor, laptop in front of him. "Should I send it?" he asked, hesitating but hopeful.

"Is this what you really want?" I ask.

"I love my job, but I want to do more, and have more freedom. I want to live abroad, I want to do humanitarian work. We can't do that unless we make more money, which means I need to send in my resignation."

"Okay, send it in," I reply, feeling nervous, but excited all at the same time. We'd already been investing in real estate for a few months, and things were going really well. Of course we'd taken on loads of debt, but it was 'good' debt. We'd also increased our expenses, and bought a (brand) new truck - my husband's dream. But we had enough money to cover everything, with some left over every month, so we must be doing something right. Now we were taking the leap to do it full time. 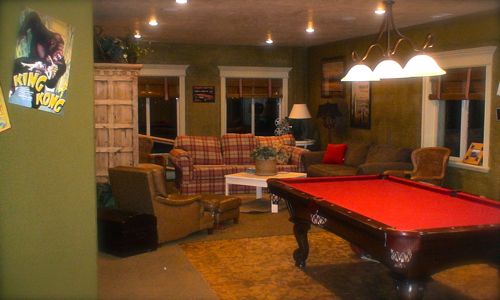 The basement of our model home

The same month we resigned, we rented out our house, sold all of our 'old' stuff and put a down payment on a brand new, fully furnished model home. It was decked out to every last detail, from artwork on the walls, silverware in the drawers, and seating in the home theater room. The monthly payment was more than we'd made in a month at my husband's career, but we could afford it now, so why not?

Of course, being able to 'afford' it meant that my husband worked from sun up to sun down. He was rarely home. I was home all day, often stressing as our monthly expenses continued to balloon. They were all justified, of course, they were business expenses, which were really an investment, right? That's what I'd been taught anyway. You have to spend money (or take on 'good' debt) to make money. But somehow, it just never felt right to me. I always had a sinking feeling in my stomach.

We did treat ourselves to a few nice things as well. My husband bought a Porsche as a 'business' vehicle. He also surprised me with a brand new Armada, so I'd have something to take the kids in when I wanted to get out of the house. We were making enough to cover all the payments.

But if something were to go wrong, some hiccup in our plans. What would possibly become of us?

By society's standards, we were a success. We had the big house. We had the fancy cars. We had the beautiful furnishings. We were making lots of money. We were living the American Dream. Right?

So why did I feel so empty inside? Why did I feel like everything was so wrong? Somewhere inside I knew that this wasn't how life was supposed to be. But admitting that to myself was just too painful. It would mean confessing that my whole life was wrong, and something 'bad' might happen as a result. If I accepted that everything we had, we'd gotten in the wrong way, then we could end up losing it all. That would mean being disgraced in society's eyes. We'd be failures. That was too much to swallow.

Instead I kept my poker face and continued straightening deck chairs on the Titanic. 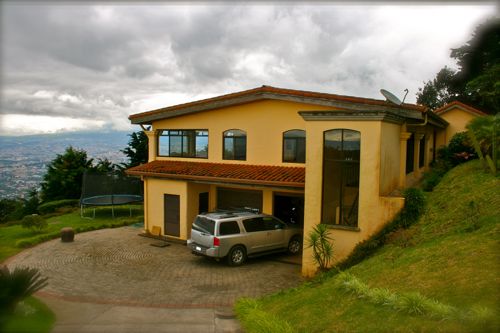 Our house in Costa Rica

Our titanic didn't sink until a year and a half later. We had finally reached a part of our dream. Deciding that we had 'enough' money for now, we moved to Costa Rica, driving their from the United States, with plans to make it our permanent home.

Unfortunately, we'd brought the American Dream with us. Moving to Escazú, we kept on our path of high living, renting a$2 million dollar mansion, and keeping up with the Joneses (other expats). We kept on our pursuit of making 'more' money, so that we could buy land, build a house and get our residency.

Within a couple of months, we went from making five figures a month to making nothing. We'd lost all the capital we had invested in the stock market. We lost our rental houses. We had to move out of our mansion and into the basement of our friends house. Ultimately, we reluctantly sold anything of value we still had so we could return to the States for a job. What other options did we have?

Fast forward four years later. I'm sitting in a rented house in Panajachel, Guatemala which costs us only $200 a month. Our old truck is parked in the driveway - the expedition vehicle that's taken us from Alaska through Canada, the Western U.S., Mexico, Belize and then to Guatemala. It's not the prettiest thing, but we own it free and clear.

Besides that, we have few other expenses. We pay for the internet; our cell phone; food for our family of seven. When all is said and done, anywhere from $1200-$2000 a month.

We own two Macbook Pros; my Canon camera; some clothes; dishes and pots and pans; books; and a small storage shed in the States. We're also unemployed (and unemployable).

By 'American Dream' standards, we look like failures. Our house isn't fancy. Our clothes are a little worn. We don't have a lot of nice stuff. We're not 'making the best investment of our lives' by paying on a mortgage. We're not building our resume, or investing in a 401(k).

But by 'quality of life' standards, I'd say we have arrived. 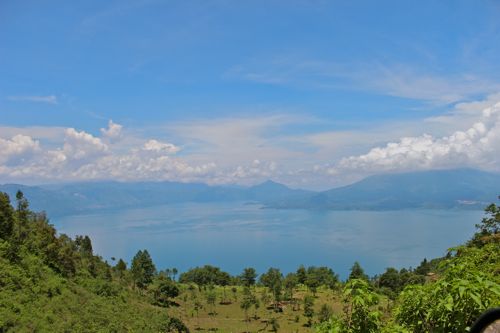 Lake Atitlan - the place we call home for now

We're living in one of the most beautiful places on earth. Everything we have, we own. Every dollar we earn, comes from doing work we love to do. Of course there's improvements we want to make. We still have big goals and dreams, we still want to make 'more' money, but we won't do it by taking on 'good' debt. It will come from building a 'passion business' and helping more people using our God given talents. It will be built one solid brick at a time, a firm foundation.

Travel has helped me discover this peaceful, free way of living. It's given me the opportunity to see that things are done differently outside my 'little corner of the earth.'

Like when we gave a few books to a poor family in the Dominican Republic, and their immediate response was to call their neighbors and pass out the gift we'd just given them. How often had I been hoarding and possessive, unwilling to share from my mounds of abundance? 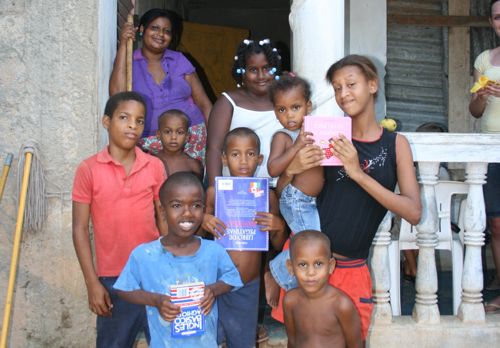 Their first thought was to share with their neighbors

Or when we were honored guests of a humble family in India. Mother, father and four grown children shared one bed in a house the size of a small bedroom. They prepared a magnificent feast - something that must have cost a few weeks income - spread a table cloth on the bed, and served us. They refused to eat until we'd had our fill.

What stood out most was how happy they were. All the children together, serving and supporting their parents, smiling and laughing. Had we been that happy while living in our mansion? Or were we too busy worrying about paying the bills and making more cash? 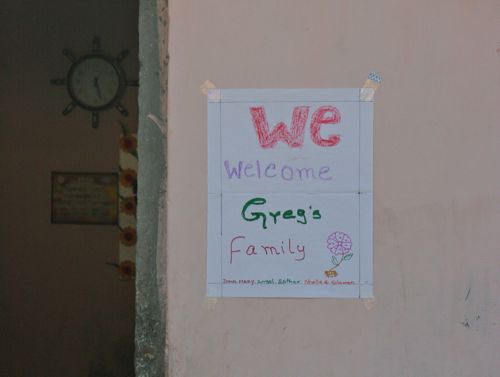 What does all the money in the world (or the illusion of having money) compare to a happy family, being surrounded by people who love and respect you, and serving others?

In Mexico, we stayed with a family who did fairly well. They lived a comfortable life. One day, we participated in a festival they were having. The reason for celebrating? One of the daughters and her husband were completing the second half of the roof on the house they were building. It had been under construction for a couple of years, and they expected the house would be done and ready to move in by the next year. When they did move in, they would own it - the land, the structure and everything inside.

Contrast that to the young couples we hear about getting married these days, who immediately strap themselves with a $300,000 mortgage. That's the American Dream? Oh please Lord, let me escape it.

Another woman in Mexico mockingly commented to us, "Americans think they are so rich, when really they don't own anything they have. Their house, their cars, their furniture, all belongs to the bank. They think we're poor, but at least we own everything we have. We've paid for it with hard work. And when it all comes crashing down, American's won't know what to do with themselves." 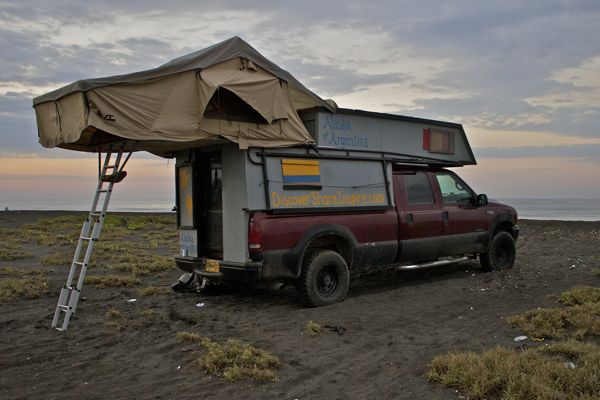 The only 'home' we own (at least for now) is ours free and clear. When we do get our own place, it won't have a mortgage.

What if it's all wrong? We grow up believing it, idolizing it, grasping for it and pursuing it with everything we've got. But what if the whole dream is just one big farce? A thirty-year mortgage, (a.k.a. thirty years of bondage). 'Good' debt vs. 'bad' debt. More money equals more freedom. Go to college. Get a good job. Put in your time. Retire and then do what you love. What if it's all a lie?

What if the truth is the exact opposite? Don't buy it unless you can pay cash (even a house and car). Don't get a job, but instead do work you love.

Make enough money to live well, but don't make money your god. Don't go to college, instead realize there's no graduation from education, and spend your lifetime studying what you're passionate about.

Isn't that the kind of life you could be excited about?

Ultimately, it's not about mortgage or no mortgage. It's not about job or no job. It's about looking around and making sure the ladder your climbing is up against the right wall, before you get to the top and realize, "Geez, is this what I was working for my whole life?"

What's right and what's wrong for you and your family might be different for each one of us. We won't discover what it is by blindly following the herd as it pursues the 'one-size-fits-all' American Dream.

Escape it and find your own.