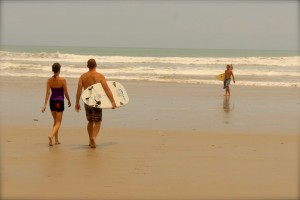 Greg and I walk hand in hand across the tawny sand of Playa Hermosa on the Nicoya Peninsula of Costa Rica.

He carries a surf board beneath his arm. It's my first attempt at surfing (because the last time we had the chance I was 7 months pregnant in Nicaragua).

Greg helps me by holding the board and I'm able to catch a few waves, scrambling to a standing position once or twice before falling off.

Later, after our beach BBQ, the kids get a surf lesson from our local tour guide, then catch some waves, chase hermit crabs and dig impermanent holes in the sand before we watch the sun set together.

We have a good life.

But during the very next week we're dreaming of heading to Europe, or sailing the coast of South America.

Why dream of being someplace else? Why wish for what you don't have? Why that inexplicable desire for far off places?

Where does that inner longing come from? I mean, isn't wanderlust for people who have cubicle jobs and live Groundhog Day?

Are you supposed to dream of exotic lands while you're currently living in one?

My mom and her husband were discussing their housesitting opportunities.

Next thing you know we're imagining what it would be like to have a 'new' experience in a 'new' culture, then we're looking up flights and checking GoEuro to compare trains, planes or just driving to explore. I even catch myself daydreaming about biking Europe like Christine Gilbert, or hiking The Camino like Jennifer Miller.

It all happens so quickly, we hardly know what's transpired, until (at least in our mind) life is taking a completely different course.

The day after mentally planning our trip to Europe, while buying organic peanut butter and herbed cheese at the farmers' market in Montezuma, we meet Honey.

I noticed Honey when she walked up, with her long, wavy, sand-colored hair, and bronzed, lined face. And I noticed that she noticed us. (Our large family kind of sticks out).

I heard her say one word to a friend. "Children..."

"Does she despise, or admire, our large brood?" I wonder.

I find the answer when she starts up a conversation. A mother of nine, together they've homesteaded, started a hippie commune, built their own boat and sailed from Oregon to South America. She birthed her babies at home, a few of them in Costa Rica, and was an original 'worldschooler' -- a pioneer of family travel.

Now her children are all grown, traveling and making their way in the world -- confident, competent and capable.

(On a side note, her husband, Heart, is a barefoot triathlete, and her son competes professionally at the Olympic level. We discovered during our conversation that Greg competed in an Xterra Triathlon with them in 2008 in Tambor, Costa Rica. They own 300 acres nearby.)

Some conversations, encounters and connections are impactful. This was one of them.

After saying goodbye, Greg and I could only think and talk about our meeting with her.

And before you know it, once again we're changing our plans, buying a boat, and sailing the coast of South America.

A few nights later, Greg says to me:

One of the best (and most frustrating parts about our life is that we'll never know where we'll be next year."

And it's true. Any one of these crazy notions just MIGHT come to pass... we never know, until next year rolls around and we say to ourselves, "Wow, did you ever imagine that we would be here?"

And I guess that's why wanderlust is good for us, for you, for everyone.

Wanderlust gives you a dream, a goal, a purpose that is exciting, enticing and scary all at the same time.

Unless, of course, you ignore it, and try to stuff it down deep inside with the excuse (or belief) that it will never happen to you.

From our experience, you never can tell.

But only if you let wanderlust take over. Give it place in your life. And then watch the magic happen.