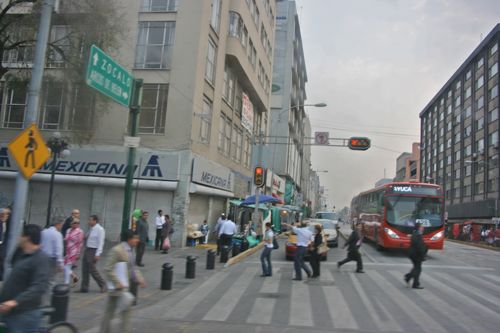 Years ago, while we were still 'green', my husband declared that he would never visit Mexico City because it was so dangerous - so he had heard.

Time and again, his belief about the dangerousness of this city had been confirmed by those who spoken to - Mexico City is dangerous.

But as we traveled, and developed, and gained a greater perspective that things aren't always the way they're reported, the possibility of visiting it developed.

However, even crossing into Mexico on this epic expedition, we still weren't sure if we would visit - too big, too crowded, too likely to get lost, pulled over, etc. etc.

After learning to respect our limits, and getting caught in a thunderstorm in the  mountains outside of Toluca, we were now headed that direction, and there was no stopping us now.

Our aim was really simple - to do laundry and find internet. But the couple of places we stopped wanted to charge $22 pesos a kilo, more than double what we had found before!

"Go to D.F. (short for Distrito Federal, the name for Mexico City), they will have cheaper lavenderias there," we were told. So we went.

There's certain days that you can't drive in Mexico City, depending on the last letters of your license plate, to help control contribution to the cloud of smog that hangs over the city.

We didn't know what day it was, or if we could drive, but we figured we only had a one-in-seven chance of it being the wrong day, so we went.

Actually, we didn't figure that out until later - after the fact. What really happened is more like:

"Well, should we go to Mexico City?" (as we cruise along the freeway in that direction).

Then as we go into the city, "Oh crap, there's certain days you're not supposed to drive."

The further into it we got, the more our previous trepidation lessened. It really wasn't so bad. Yes, there was a big cloud of smog, and lots of traffic and lots of people. But what had we been so frightened of, all those years ago? What was the 'too dangerous' part that made Mexico City un-visitable?

Once again we discovered that most peoples interpretation of a place is more revelatory of who they are as opposed to what the place is really like.

I'm sure danger was out there, if you went looking for it. But otherwise it was just a city (a very large one), with people - people like you and me (lots and lots of them - in fact almost 23 million).

But, being a very large city, and one that we were unfamiliar with, it did require the full attention of both Greg and I to successfully steer through it.

The challenge of trying to figure out where you are, and where you wanted to go, while deciphering street signs, watching for pedestrians, one-way streets and navigating traffic, was mentally intensive. Add to that the not unusual, constant requests of five little people behind us, and it could have been a recipe for a great deal of tension.

Instead we handled it adeptly. It wasn't until after Mexico City that the tension arose.

It was kind of deceptive that way. We left the city, (we decided we would come back another day to sight-see) and it started to open up a bit to trees and el campo. "Ahhh, we've made it," we thought. "That was easy."

But then, over the next rise, we saw it. The endless sprawl of man's domain, and the congestion that accompanies it. Here was where a majority of Mexico City's 23 million inhabitants lived, and where they were trying to return home for the day.

We would have stopped to get some food, but never found a place to park, or that could have been reached without major military recon maneuvers.

So we pressed on, until, like all things, we passed through it and reached our goal - San Juan Teotihuacan.

Here we discovered a pleasant little place, with a groovy market offering plenty of tasty options for dinner.

After filling our bellies with rice, beans and quesadillas, we discovered Trailer Park Teotihuacan - a heavenly place with a grassy field, showers and internet - where we set up for the night.