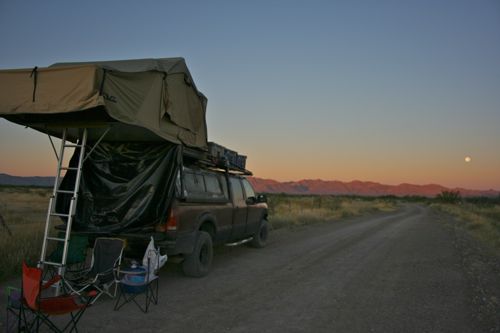 In an attempt to find some sunflower seeds, my husband spots an OXXO conveniences store, and throws the truck into reverse in the middle of the highway.

Unexpectedly, the truck jolts and my heart leaps out of my chest. Oh no! We've just ran into somebody or something.

But looking behind us, nothing is there. No poles, nor cars, no motorcycles.

So we pull ahead into the OXXO parking lot, and my hubby runs in to search for his seeds. He comes out with a pack of mints and some pumpkin seeds. No sunflower.

Starting up the truck, he puts it into reverse and attempts to back up. It won't move.

"It's like the emergency brake is on," he tells me.

He attempts it again, before shutting off the engine and opening the hood. Poking around under there he discovers that the engine oil is low - not good - so he fills that up before further investigation of the mysterious case of 'no-reverse'.

Meanwhile, I've got a case of the runs - which is what I'm doing, running - to the bathroom. During my scrambled effort to locate $3 pesos and insert them into the mechanical door, I'm ever so grateful that I put that diaper in my pants to protect me from mishaps. It's now serving it's purpose.

But that's not what's on my mind. Instead I'm thinking of our vehicular predicament. We could be stuck here. Who knows what's wrong with the truck, how long it will take to fix it, and how much it will cost.

Back on the john, I realize that in my mental distraction I failed to notice that there was no toilet paper. I yell out to my kids, who borrow $3 pesos from dad so they can bring me some.

Concurrently, Greg is throwing on his 'dirty clothes' and crawling underneath the truck for further investigation. Once I exit the sanitarios (noticing on my way out the the toilet paper is by the sink - I should have known), he gives me the report.

"The back brakes are shot, and the drive shaft is busted."

Great. I wonder where we'll be sleeping tonight.

Before I know it, Greg tells me that the guy parked next to us (who is from a different town and is selling men's shirts out of his van), has told someone, who told someone else, who is bringing a mechanic to look at the truck.

In a flurry of activity, the mechanic shows up, who calls his employee with a jack, who lifts up the truck, takes of the tires, removes the busted piece and is gone again.

We set up our camp chairs in the parking lot, next to our lifted, tire-less vehicle, and wait.

A man who is looking at the shirts in the van next to us strikes up a conversation. He and Greg hit it off. He shares is bag of guayaba with the kids (who devour it), then tells us he's in the cheese business and that he'll be right back.

Our new friend returns with two very large blocks of (delicious) cheese, which he offers as a gift.

As the sun descends lower in the sky, the mechanic returns and sets work putting our truck back together. He replaces the brake pads, and re-attaches our now fixed...part (I really don't know what it's called).

Now dark, and with the help of headlamps, he and Greg finish up, and our truck is once again operational.

Then they hand us the bill. Fearing the worst - that it will wipe us out of all 'on-hand' funds - and offering to trade for parts we just bought this morning (thinking that the front brakes were bad), it was an appreciated surprise when we were only charged $600 pesos for parts and labor! (That's like US$47.00!)

What a miracle - that we quickly found a mechanic, who actually had available parts, and got the job done the same day!

We ate our cheese and chips for dinner (across the street from the Pemex gas station, our camp spot for the night) with a grateful heart for new friends and generous people.

Watch the whole experience at the end of this video.