This is a guest post by my sister, who may soon become a regular contributor. Click here to learn the basics of yoga with her.

The morality and ethics of riding elephants (and other tourist attractions focused on the spectacle of animals) is an old discussion. So why write about a used topic?

Because maybe you will sympathize with my story and perspective. Maybe my opinion will help you feel better (or worse) about your position regarding the extortion of elephants.

Living in Thailand for the past three years, I had held strongly to my opinion and vigilant avoidance of animal related tourism.

I didn’t want to reinforce the sometimes inhumane domain of man over animals. Heck, I’ve been vegetarian, vegan or pescatarian (depending on location and situation) for the last 5 years. I felt remorse when I caught my first and only salmon and physical disgust when I think about factory farming of cows, pigs and chickens.

I very much think and feel for animals, a phrase in Thai “song saan” meaning to feel sorry or have sympathy for.

After my rant above, and in full disclosure, there was the time that the school I taught English at took the kids to an elephant show, where elephants perform tricks like shooting baskets, playing football (soccer), painting pictures, throwing darts and gave daring viewers an elephant massage (this takes great mastery of the animal not to squash you with his feet, but just give a gentle massage instead).

It is also not uncommon to see people walking elephants, small and large, down busy city roads. The caretaker’s solicit you to buy sugar cane or bananas which you then can feed to the the elephant. I am guilty of this, just one time, on my first month in Thailand. It was a memorable, surreal moment to see my first wild (not behind a wall or in a cage) elephant.

That is what this post is about -- thinking and believing one way and then finding yourself doing the opposite, for good, bad or neutral. You can always decide the manner in which you act.

As I rounded over 3 years and a friend was visiting Thailand, I was coerced over several days into being a partner in crime, and finally going on an elephant tour.

I had heard recommendations that in this specific company, Thom and her mahouts (elephant trainers), had a good history and reputation. Thom is still around and running the property, involved with the elephants, and giving out orders.

The day started out greeting the elephants who are held in simple bamboo shelters with a roof (shade from the sun) and a few guide rails. These animals are huge when you’re up close and personal. We snagged a few photos standing a safe distance from their overwhelming presence, not yet comfortable enough to feed a banana to their gaping, pink, fleshy mouth. . . that came later.

Our specific tour offered bamboo rafting in the morning and later bathing with the elephants. The rafting was something we made fun, even with low water (it was the beginning of rainy season) by giving the the hired paddlers a seat while we pushes ourselves along the low riverbanks with a few collisions into shores, mud and rocks. After a hot morning baking in the sun, floating down a river, we returned to walk and bath with the elephants.

When two people ride an elephant, the person in back goes up first.

Watching my friend step on the elephant's leg and grab forcefully the flapping ear (as directed by the mahout) they assist you up and over the elephant into a very wide straddle.

If you’ve ridden a horse you know the soreness that comes after time spent sitting wide legged over an animal in motion. Now imagine an animal double or triple that size!

My turn to mount the steed and I struggle with foot placement and the perception that I am causing the elephant pain by tugging on her ear, like a rope used to scale a wall.

Finally on top, and getting familiar with the height and view of being perched on an elephants shoulders, we head off on a slow teetering walk around the dry foot paths of the property to get our sea legs for riding an elephant.

The most difficult part is when descending a hill, when your body wants to fall forward or off to one side as the elephant takes a step, and you must squeeze and hold on as you follow their rhythm.

Passing by a trough and barrel of water, the animals take it upon themselves (or from direction of the mahout) to drink their fill and cool themselves down by spraying water like a hose over their heads and cascading down onto their backs and bodies, including it's riders!

Don’t be afraid of elephant slobber, just keep your mouth closed and spit if necessary and you’ll be alright!

Elephants walk like there is no rush or care in the world, a very slow and repeated motion, but eventually you arrive at the river for bath time. Guided in by the commands of the mahout, the elephant submerges until your feet touch and it’s only her back and head above the water.

This is when the fun begins, the smiles happen and memories are made, so that everyone advocates that YOU MUST do a tour with elephants! 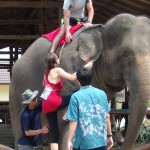 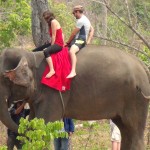 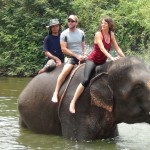 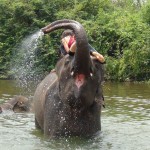 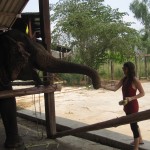 The following 30 or so minutes are several tricks the elephant has learned to shake, toss, through or buck you off his back and into the water.

If you thought bathing with elephants meant soap and suds, then you’re mistaken, at least with this company. It’s like riding a mechanical bull and trying to stay on, but in a much more playful way.

The elephants interact with you, spraying you with water and you marvel at this playful gigantic animal. They have the strength to crush you but almost are too innocent and pure to every imagine such a violent action.

Many laughs and falls later, it is time to walk the dusty dry road back to Thom’s camp. Getting off an elephant is just as challenging, and it's best to have a few bodies and hands around to escort you to the stable earth surface once again.

There was no rush to leave as our tour package included a soak in natural mineral hot tubs as our lunch was prepared for us. While waiting for our transportation back to town we had the freedom to feed the elephants whole bananas, peel and all, by way of their very eager, seeking trunks or directly into vast open mouths.

Grabbing a few more photos and moments staring into the small eyes of a holy animal, you bid your farewell, never to be the same again.

Am I happy I rode and bathed with an elephant?

My answer is YES!

Do I feel guilty about supporting an organization that cages animals?

But then again, we cage cats, dogs, birds, guinea pigs and horses. In Thailand they simply choose pets of a much larger size and if they didn’t have them as pets, the opportunity to encounter and engage with an elephant wouldn’t be available for so many to enjoy.

My guidance if you’re struggling with the decision to ride, is to know that you still can choose the manner in which you conduct yourself with the elephants.

Go with openness, love, care and curiosity for the animal. Show it kindness and respect. Just like a dog that is happy to receive a dog treat or a horse that enjoys a tender brush of the mane, elephants too enjoy gentle acts of kindness.

Have you ridden an elephant? What do you think?