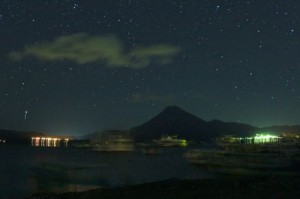 That means there's been a lot of tourists coming to the 'land of the Mayas' (which is Guatemala, NOT Mexico) to celebrate.

We celebrated by waking up at 3:30 a.m. (why THAT was a celebration, I do not know. It felt more like torture -- the crazy things I do for blogging). Our purpose was to watch a Mayan Ceremony that was happening on the shores of Lake Atitlan.

As we left the house, we discovered that our gate was wide open. Then that the kids bike was missing. Weird.

We hemmed and hawed and hypothesized, then noticed our two auxiliary deep cycle batteries were gone (we were going to use them to power our camper with the remodel that Greg is working on -- video and photos soon.)

Instantly we replayed the past few hours in our minds, creating scenarios, crime scenes and suspects. Epic's bark at 1:30 a.m. The howling winds; his growling at 2:30; lights on or off; gates locked or not? who knew what we had sitting on our porch?

Eventually concluding that there was nothing we could do, and that they probably wouldn't be back, we let Epic off his chain, locked the house, locked the gate and started walking in silence down the dimly lit street in the direction of the lake.

The wind produced eery sounds -- metal scraping on metal, branches creaking -- and litter blew down the street like tumbleweeds in an old time move. Shadows play tricks on my mind. I take my camera from around my neck and tuck it into my bag. Just to be safe.

We walk and walk and walk. The only talking we do is to present other possible suspects. The plumber? The water boy? The kids next door?

Darkness reigns as we pass piles of garbage in the street (it's garbage day), slinking dogs with sinister sneers, and the occasional early riser (or late night reveler?)

At length we reach the shore, and then the Mayan ceremonial ground, where we expect to see a ritual in progress, but all we discover is more darkness, and a few people lurking in the shadows, also waiting for something to start.

We wait. And wait. I decide to use the time by taking some shots of the volcanoes silhouetted against a blanket of stars. 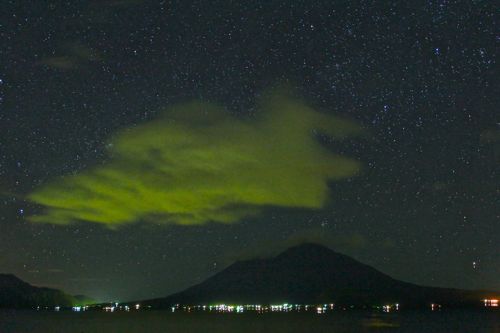 By quarter to five, we get word that the ceremony is taking place at a different location. Greg wants to go home, but I persuade him we should go see... so I can get some good photos.

Walking down a dark alley, we reach the river. Two man are standing there, one obviously too drunk for his own good, the other trying to hold him up.

We cross the rickety bridge lit by a single lamppost. The wind blows ferociously down the barren, rocky riverbed, straining to knock us to the rocks below. 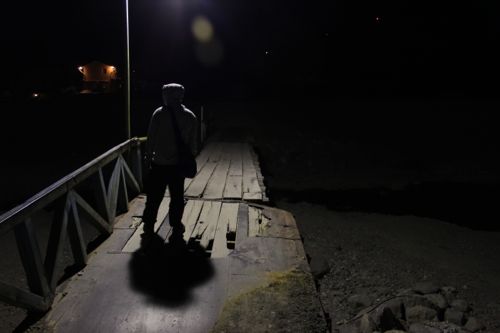 Along vacant streets we continue, until we nearly reach the boat dock. Parked vehicles and a gathering crowd indicate this must be the place.

Normal looking Guatemalan men and women of various ages are swarming onto the cement platforms, and on the grass below -- a notorious hippie bed. A circle has formed around a ceremonial display of flowers and incense.

Although it's an hour past the proposed starting time, they're just barely beginning (Latin standard time, I guess). A man is speaking in Spanish, and another man is translating, into broken English.

A Mayan ceremony being translated into English? That lacks authenticity...

Regardless, I appreciate his words of wisdom:

As we reach the grass, I notice that there's lots of Guatemalans, lots of tourists, lots of hippies, and one Mayan man.... Hmmm.

The Spanish/English translating continues, then the mariachi brass and percussion band strikes up (what the? since when did Mayans play brass instruments??), until everyone is asked to kneel, and the fire is lit. 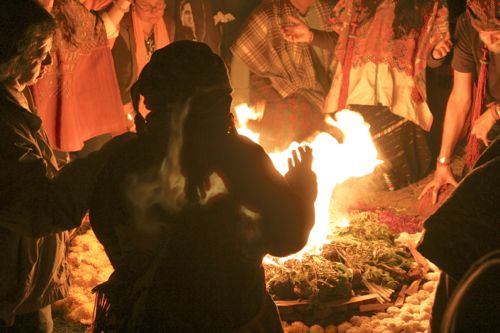 The Mayan man then begins speaking in kakchiqel. His translator tries to hold the microphone to his mouth, but they're experiencing technical difficulties.

The kakchiqel prayer continues without amplification, while the hippies around the fire snap their fingers, wave their arms and make other undulating motions; and the tourists snap photos. 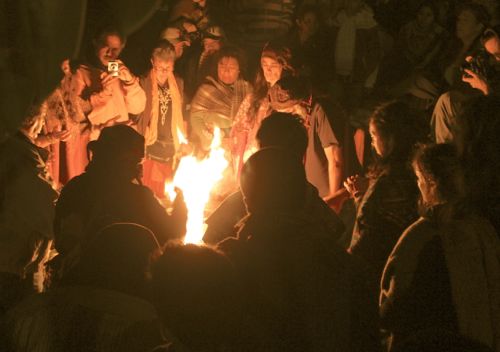 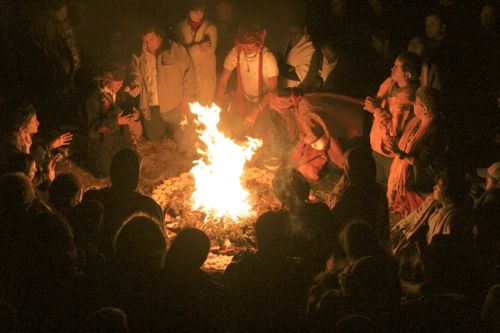 It goes on like this for quite some time. I leave my sleepy husband in his hoody, to capture shots from different angles.

There's the flowers and the incense... 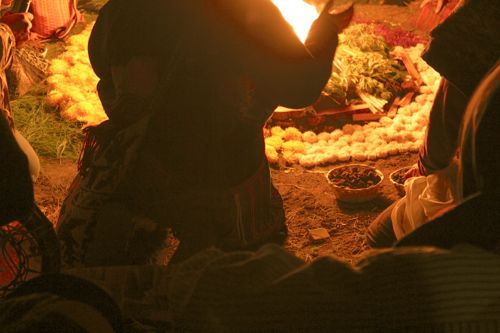 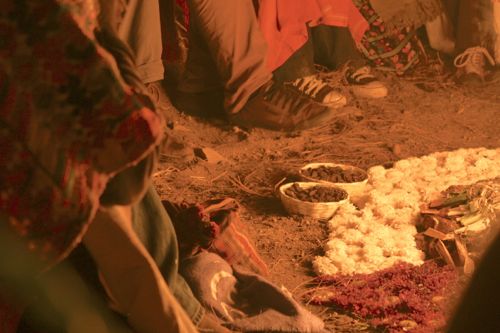 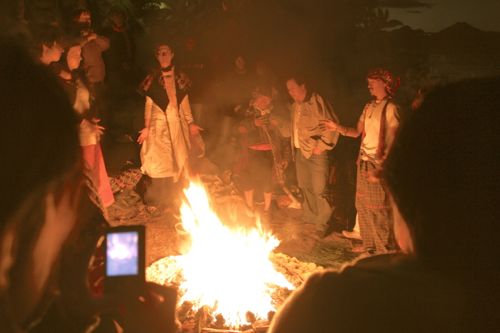 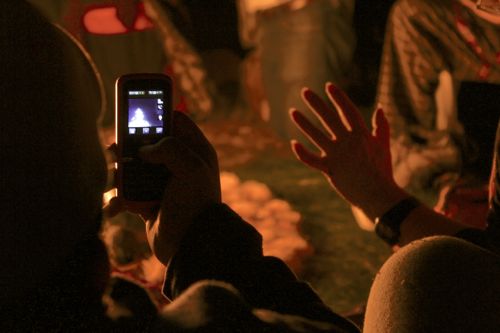 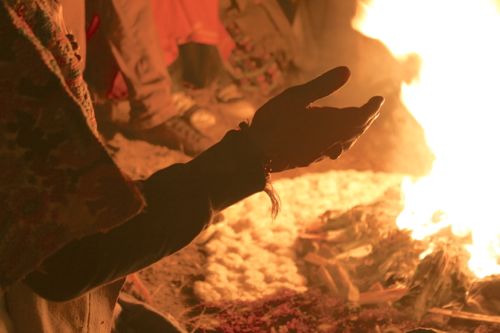 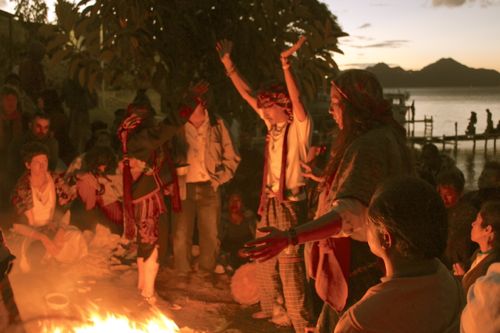 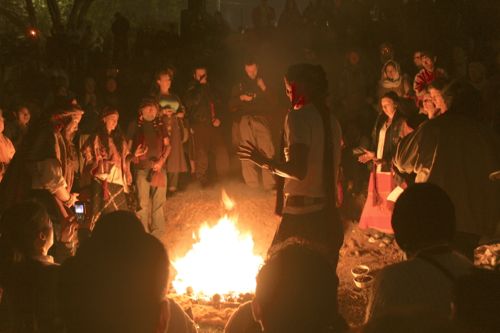 I was tempted to call what they were doing 'weird', but then I realized that many things I do are weird to others.

The Mayan man continues -- alternatively asking his 'spiritual assistants' to help, by kissing the earth, sprinkling holy water on the crowd and blessing the lake. 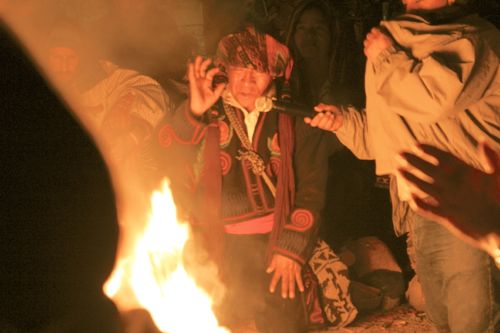 This continued until the dawn chased away the darkness, and the beauty of the lake and the blanket of morning colors captured my attention. 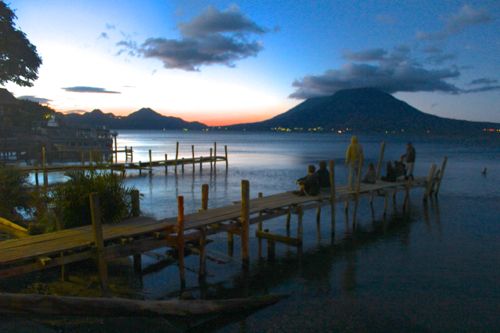 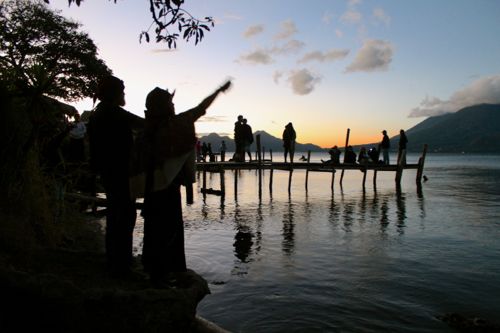 The Mayan people believe that their home is sacred -- the 'naval of the face of the earth'.

The volcanoes and surrounding mountains are the abodes of gods and ancestors. "The lake bears the primordial waters of creation, suffused with animative power capable of regenerating and sustaining life, as well as the capacity to destroy it" (Allen Christensen) 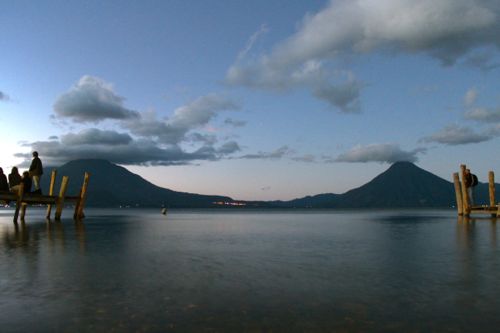 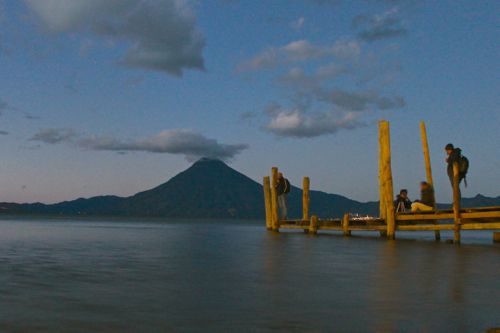 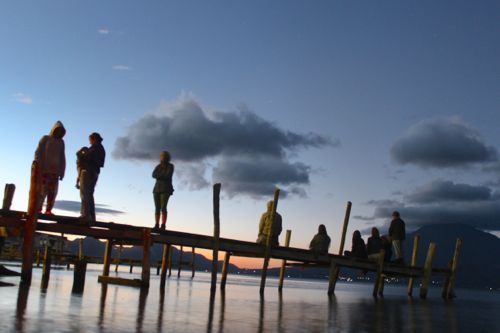 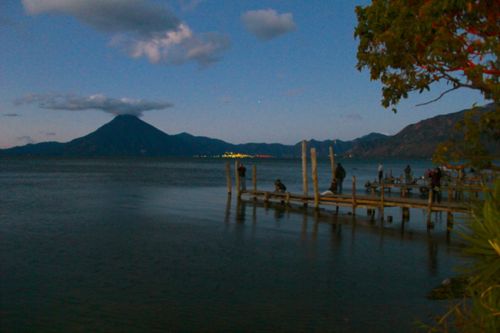 We caught a tuk back home, then cuddled up in bed, protected against the howling, chilling winds which raged outside.

Life will continue to go on as it has, unless we do something to make this era different than the last.

(If you're reading this in an email, click here to watch the video)

What will you create with your new beginning?