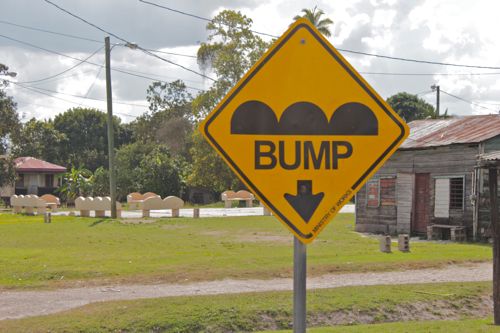 The Chetumal/Belize border is notorious for charing a fake exit fee for leaving Mexico - usually around US$20-$25. We just spoke to a couple last week who was charged $25 to leave Mexico.

The border officials have a ploy to catch the unsuspecting tourists who come from Mexico to visit the 'Free Zone' in Belize - an entire town that's like one giant factory outlet.

But we'd done our homework. We knew there was no exit fee. And we weren't going to pay it. In fact, we were prepared, if necessary, for Plan B - to drive the additional kilometers to a smaller crossing.

Plan B was unwarranted. As I waited in the truck with the kids, Greg confidently walked to the counter, passports and Mexican tourist cards (called FMM's) in hand, stapled to the receipts (we paid for the cards when we entered the country. If you have not paid for your FMM already, then you would have to pay when you cancel them).

The official quickly stamped the tourist cards (FMMs) and the passports, handed the passports back to him (you have to turn in the FMM's), and that was it. No mention of any 'exit fee'.

Meanwhile, to Greg's left, a Canadian couple were getting 'worked'. They'd gone to visit the Free Zone, had been asked to leave their FMM's at the border for 'safe keeping', and now were asked to pay to get them back.

We had tried to make a trip to the Free Zone a few weeks before, and they'd wanted our FMM's. We knew that was bad news, so we didn't go.

But even before that, our friend Charlie had taken his family and gone in without even a passport. And then our pirate friends had taken a taxi to the border, and from there a free bus from the border right into the Zone - no fees, no passports or FMM's.

It's difficult to understand what is normal procedure is here. But it seems that if you're driving in, you stand more of a chance of getting swindled. They'll want you to leave your FMM's, and they'll want a bribe to give them back.

I'm including this information in case any of you make a visit to this border. Scams and bribes are wrong and illegal, and the more people that are educated about what to expect, what the proper procedure is, the less success the swindlers will have.

You don't have to pay bribes. One of the great fears people have about driving in Mexico is getting asked to pay a bribe by the policia. It's illegal. And if you know that, and let them know that you know that, you'll never have to pay.

We only got asked for propinas by police twice during our entire 4 months in Mexico (once in a small city near Oaxaca, and once in Tulum, but not until after the tourist season started).

Both times, Greg let them know that he knew what the laws were, and they let us go.

Be educated and you free yourself from being victimized, and help to stop the vicious cycle. The policia only ask tourists for bribes, because they know that they can get them It's kind of like a bonus to their paycheck.

If you're going to the Free Zone, take the free bus provided for such a purpose on the Mexico side. You'll avoid the entire process.

If you are driving, you might be asked to leave your FMMs. Having the receipts stapled to them will save you the possibility of 'paying again' when you come back to Mexico.

If you have not paid for your FMM's, then you will have to do that when you leave, for good  and cancel - which is not technically an exit fee, but the tourist card fee.

If you are driving, and leaving the country, not just visiting the Free Zone, don't forget to cancel your vehicle importation permit - and get back your deposit (kind of a big deal since it's between US$200-$400)!

Well, that's my travel advice section. Now back to your regularly scheduled programing.

What's been your experience with this border crossing?