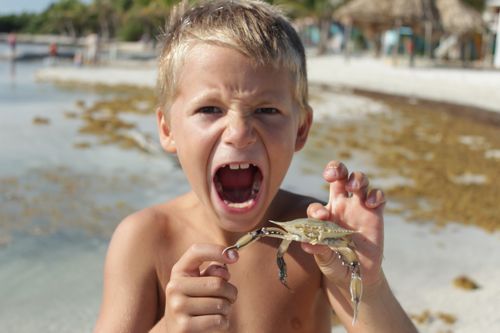 Relaxing on a lounge chair, my Kindle in hand, my children splash and play in the pool which overlooks the turquoise ocean touching the island of Ambergris Caye, Belize.

A small smile curls my lips, contented with the peaceful way in which my children are getting along.

There are a few disagreements here and there, but for the most part, their play is happy and under control. I'm aware of the older couples lounging at one end of the pool, but certain that the splashing and noise level are within reason for pool time play in mid-day, I return to my reading.

Atlas is toddling around the pool side, and Greg follows him close by to catch him should he topple in. 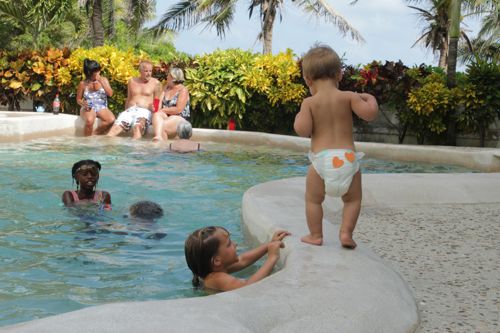 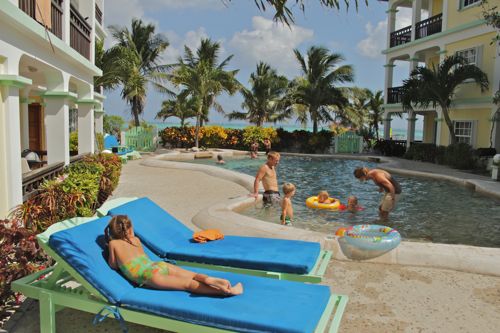 Ahhhh… All is right in my world.

I serenely read the words of Charlotte Mason, who says, "the more [the children] run, and shout, and toss their arms, the more healthful is their play," when out of the corner of my eye I notice one of the women from the far end of the pool walking in our direction.

Without looking up from my reading, I hear her say to Greg, in a voice of feigned tolerance, "You know, we don't have a problem with the kids, but the noise level… really. Can't you control your kids?"

I'm the first to admit that there have been times when my kids have been pretty wild and rowdy, disobedient, defiant, and downright loud. But this is not one of those times.

They are, however, being children. They get excited about small things, they splash and jump and occasionally whine when a toy is taken. But their noise level is in normal decibel range for children playing in a pool in the middle of the day. Did you want them to whisper? This isn't the library.

There's nothing they are doing that seems disorderly or worthy of being disciplined. What I'm I supposed to say to my kids, "Hey don't make any noise while you're playing? Don't talk while you're in the pool?"

So I continue with my reading, and Greg continues overseeing Atlas' play. You can't discipline children for being just because someone has a difference in perception.

Several more minutes pass, and I'm lost once more in my book, when I become vaguely aware that the old man across the pool is yelling something. Without looking up, I open my ears enough to catch parts of it…

I continue with my reading. I'm not going to get flustered because of others outbursts.

But in a few moments I realize that Greg is over there exchanging some words with the man. Apparently he had been yelling at Greg about the kids splashing, and Greg had gone over to 'work it out.'

I can't really hear what's being said, but I can see that it's heated - at least on one side. Greg rarely loses his cool, that's one thing I love about him.

There's yelling and swearing, and finally one of the women who had been dangling her feet in the pool gets up to quiet the roaring geriatric.

"Calm down," she tells him, patting him on the chest "It's apparent he [Greg] doesn't get it. It's not the children's fault. It's poor parenting."

Meanwhile, the kids are oblivious to any disputations, and are happily jumping into the pool with as much gusto as since they arrived.

Greg asks the boys to go play at the other end of the pool. Kimball asks why, climbs up once more and jumps in before swimming to the shallow end.

"See, you can't even control your kids," retorts the peanut gallery.

I feign indifference and continue with my reading, as though parental insults are hurled at my husband everyday.

Greg calmly walks away, and gathers the kids around him quietly by the edge of the pool. He's whispering some instructions to them, and I catch a few words "…you're not in trouble…play at this end…or get we can get out…"

Soon the kids are climbing out, Greg is gathering belongings, and I follow lead, dying to get into the condo where we're staying (with our friends the Kings) to find out what was said.

Once inside, Sabina King and I get the 'low down'. Essentially it unraveled like this:

The kids were jumping in the pool. The jumping splashed water in their rum and coke. This finally resulted in an outrageous yell, directed at Greg.

Greg suggested they talk to each other like adults and work it out. The man preferred yelling, swearing and insults, as well as a few threats that he was 'about to get up out of his chair, and then it would get ugly.'

Meanwhile, the gray-haired companion of the first women who had, according to them, "asked nicely for our kids to be quiet," now puts in his two cents.

"My kids aren't acting like that," he tells Greg.

You mean the two teenage kids over in the corner who are glued to their video games? Those kids?

You are seriously comparing our 'real life' participating 9, 7, 6 and 5 year old to your 'reality disconnected' teens? Seriously?

Believe me, my kids would be just as quiet as yours if they were glued to some reality robbing device, instead of actually experiencing existence.

We have a lovely time discussing and dissecting the entire experience, and analyzing the revelations in human character.

"It's always shocking to me when grown, 'mature' adults still haven't learned how to master their own emotions," Greg remarks.

"What's funny," he continues, "is that as we left the pool, two middle-age sisters from the Midwest said to me, 'I think your children are beautiful. They add a lot of life. We'd way rather have them here than grumpy old people."

We thought that was the end of our encounters with human nature, but during the coming week, two more 'human experiments' ensue, providing fascinating insight into behavior and character.

The kids (seven total counting the King's two children) spent a total of about 1-2 hours per day in the pool - usually mid day when the sun was the hottest.

We didn't let them go out in the morning, because we knew others would be sleeping. By evening, we were all getting ready for bed. We thought this plan would work well for respecting the other residents and tourists, usually older retirees, whom I'm sure were unaccustomed to having seven children around. 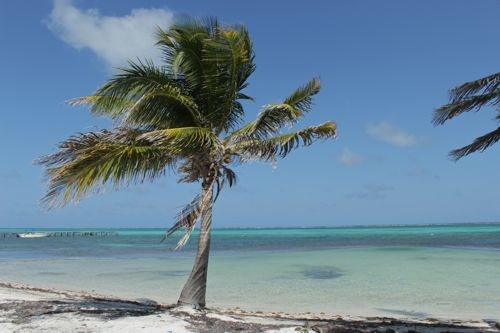 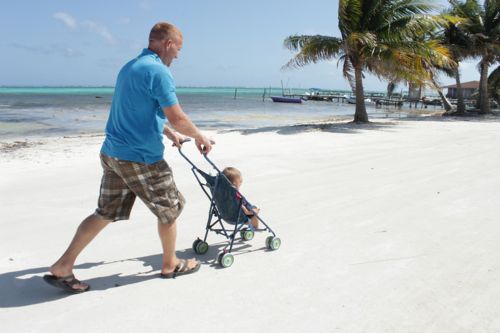 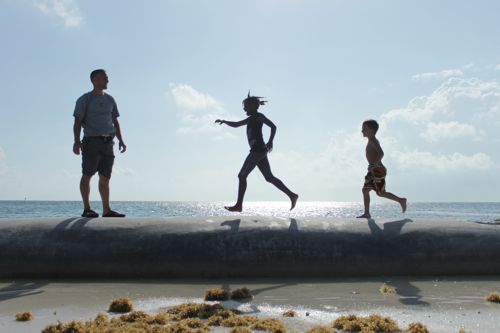 For the most part, we went about our lives on the island - cooking, eating, walking, exploring, shopping, and occasional swimming. We weren't aware of any major impact our seemingly segregated lives was having on others… until an email was received.

"Your commandeering of the pool, and the constant noise level has created chaos in my life…if I know how much longer [the Dennings] will be around, then I might be able to stick it through, though I've already arranged a meeting with management to discuss the matter."

Two hours a day (or less) of kiddie noise at the pool is creating chaos in your life???? Two hours of playing in the pool each afternoon is considered commandeering? Maybe you assumed we were taking over when we planted the pirate flag? Don't worry, it was all in fun. 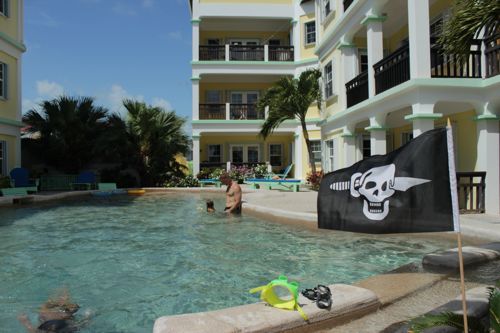 Planting the pirate flag didn't mean there was a mutiny of little people.

I'm baffled by this attitude that I haven't seen for over four months. In Mexico, you just don't get bothered by other peoples noise, no matter how much you may not like it.

I certainly didn't like Mexican music being played all night long, or dogs that bark for no apparent reason and without restraint. I don't like roosters that crow at 3:00 a.m.

But being exposed to it didn't cause chaos in my life. Maybe an occasional sleepless night, but chaos? Mayhem? Pandemonium? Inner turmoil? Uh, no.

Inner peace comes from within, not from the noise level of children. Believe me, I know. If I waited for peace and quiet from my kids before finding inner solitude, I'd be verifiably insane.

If I was worried about what the authorities thought, would I have avoided sending my kids to school, and left the United States to travel with them in 'dangerous' countries?

Why is it human nature for us to run to 'authority' - mom, the teacher, the principal, the HOA, the police, the government - to solve our problems? Can't we work things out on our own? Human being to human being? 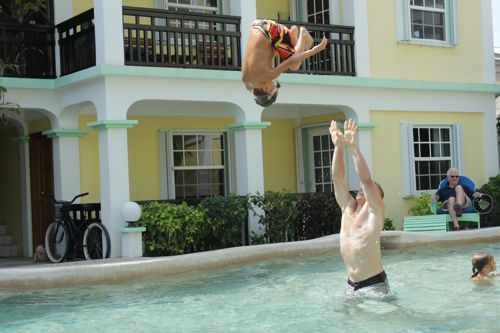 This was the rowdiest things got all week, and that was daddy's fault. 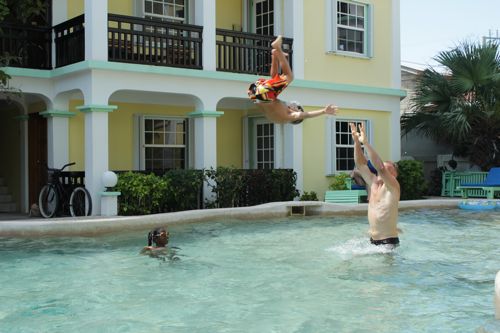 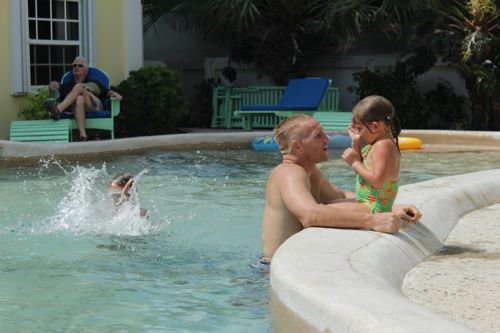 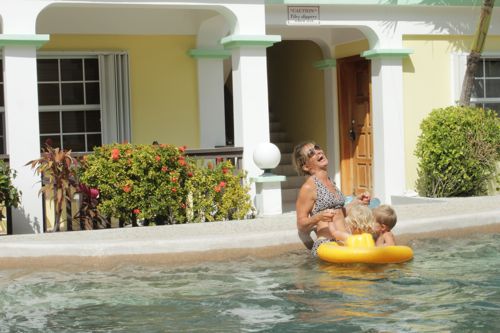 'Course, maybe Sabina was the real cause of all the noise 😉 She's having too much fun.

We thought that would be the last of the encounters regarding our children's behavior, since we would be leaving soon anyway.

We were having a lovely time on the island with our friends, but we needed to get back to 'reality' and the mainland where our truck was parked.

The afternoon before we left we were enjoying the pool one last time. The grumpy tourists had already returned home, and things had been resolved with the emailer.

As is his custom, Greg had struck up a conversation with someone new at the pool. I went over to join them after awhile.

We had a lovely little chat with a pleasant and amiable woman originally from England. We talked about all sorts of interesting topics.

Then as she turned to leave, she bid us farewell and a good journey, and added, "You know, some children are just so horrid and rude, but yours are so good-natured and well-behaved. They're really quite lovely."

It was the same children, the same behavior, four different and unique responses.

Their responses do not define my children as either 'good' or 'bad', 'obedient' or 'disobedient'. But it did define the person who was commenting - either as 'tolerant' or 'intolerant'; good-natured or bad-tempered; patient or complaining. Their comments were revealing of parts of their own character, even if they were made at their 'worst' moments.

I suppose that's why James Allen has said that "Circumstances do not create the man, they only reveal him unto himself."

Yes, we all have bad days and bad moments when our worst comes out, and it doesn't mean that we're like that all the time.

But I must own that even at my worst, it's still me, (even though I'd like to blame my horrid behavior on the wicked witch that commandeers my body on occasion.)

If I don't like how I act or what I do when I reach my 'breaking point' then I need to change, not blame the circumstances (or the kids).

I am who I am at my best and at my worst. And if I don't like the me at my worst, then I've got some work to do. 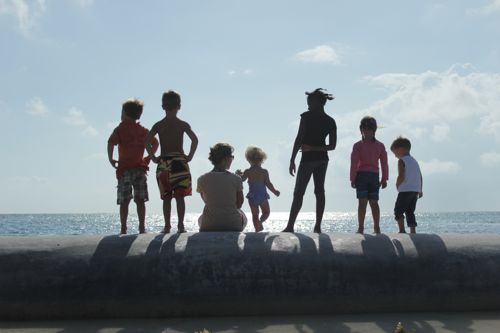