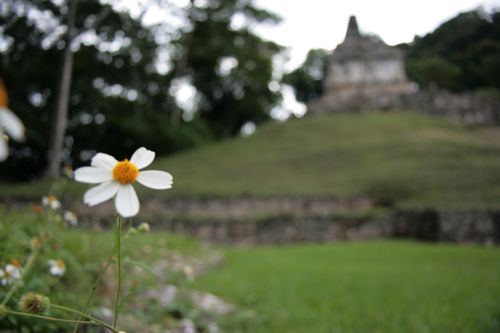 We woke up Sunday morning in the howling campground Mayabell and got ready for church.

Driving into the town of Palenque, we spotted four young men in white shirts and ties. We know who they are!

We honked and waved, then asked directions to the church. "We'll see you there!" they added.

It was a great and dreadful day. Baby Atlas slept for the first part of the meetings, but when we woke up he was very grumpy.

I got his stroller and pushed him around the halls. In the meantime, Greg was in class with the four American missionaries we'd spotted earlier. And then in the hall, with them all gathered around like little chicks waiting to be fed by their mother.

It was sometime then that someone exclaimed, pointing at Atlas, "Esta vomitando!" (He's vomiting.)

He did vomit, a lot, all over his clothes and the stroller. We cleaned him up in the kitchen, washed his clothes out in the bathroom (how wonderful to have running water),

Our plan was to hang around Palenque until our bank transfer came through, then to visit the ruins before heading to the Yucatan. The entrance fee for the park was only $51 for each adult, but we didn't even have that.

Not sure what we would do or where we would go, we got an answer when after church, we were invited to stay at the home of a family who had a vacant room above their house.

It was one room, that had a bathroom with running water, and a sink, electricity, and wi-fi. They usually rent it out for about $800 pesos (US $61) a month, but said we could stay for free.

It was empty, except for a hammock which they graciously lent us. I was satisfied to use the internet to my hearts content. My kids were ecstatic to have friends to play with, which they did, for the next 5 days as we camped out in our one room home in Palenque.

They played and talked (Spanish of course) and amused themselves with all sorts of diversions, typical of little children who live in rural villages in Mexico.

My oldest son thought it would be fun to play in the mud after a rain storm. He coated his feet and ankles and hands and wrists in mud, made some mud pies, and for attention, thought it was funny to eat some of his creations.

Not cognizant that his mud pies were made from the same road where trash was strewn and stray animals did their business, he learned a tough lesson about hygiene in foreign countries, with a bellyache and puking session all the next day.

Monday we expected our bank transfer to be complete, but when it experienced technical difficulties, we started to get a little worried. Now we would have to wait for another 3-5 days, and we were starting to get a little low on food. We'd have to ration.

I kept busy on the internet, uploading videos and posting here on the blog. Greg worked on washing our laundry by hand. We all got a fascinating look into the lives of average people who live and work in Anytown, Mexico.

In Mexico, there is no 'noise ordinance'. There is no 'talking quietly out of respect for the neighbors who are sleeping.'

The woman who rented the room next door to us, came home at 1:00 a.m. I was woken up by her loud talking as she tried to open her door which was apparently jammed. She wasn't whispering, or even talking softly, just using her regular voice, and making plenty of noise banging the door around.

It ended when our hosts below came up and broke out the window so they could open it from the inside. All this was done with as much noise as if it had been daylight.

It's not done out of rudeness or a lack of respect. It's just the culture. There's not a time when you should try to be quiet (and in the cities and towns, there is not very much quiet time, ever).

There's always cars driving, music playing, dogs barking, roosters crowing (at all hours of the night). It's just a noisy place. From their infancy they adjust to the noise, so when their neighbor wants to play his radio at six a.m. it just blends in to the existing cacophony, which I'm sure they're able to tune out. Maybe they would be surprised to know that their noises wake us up.

Many Mexican people keep late hours too. For our family, especially being on the road, when it gets dark outside, we're ready for bed, sometimes as early as 7:00 p.m. Some families in Mexico don't even eat dinner until 9:00 or 10:00 p.m.

We slept in a hammock and on the floor (and in the roof top tent); washed clothes by hand and hung them to dry on the roof; shared one room; and lived like locals in a lot of other ways too.

When invited down, we saw first hand how our host family lived. They had running water, but the kitchen faucet was broken, so she would pull water out of a hole in the floor, where their cistern was located. Her stove was small, as was her fridge, about half the size of U.S. appliances.

Bugs are always a problem. If you don't sweep, mop and wipe down constantly, then the ants, flies and mosquitoes just gather.

And the mosquitoes, wow. I feel like I'm enlisted in Mothers Against Mosquito Bites.

Never leave food sitting out and uncovered for any period of time. You can't take a day off from housework, or you'll be invaded.

Authentic Mexican cooking is always amazing. They generously shared a couple of meals, which were, of course, incredible. No recipes, just made-from-scratch goodness passed down through generations.

By the time we were eating what meager food we had left, (no-bake cookies and chocolate milk were actually breakfast one morning - highly untypical - simply because we had cocoa powder on hand), our transfer finally cleared, and the flood gates opened. We could go shopping! Happy day!

Fresh produce and eating out! Oh how glorious. It also meant freedom to move on, now knowing we wouldn't starve in el campo somewhere.

With money in our pockets, we bid farewell to our new friends and our pseudo home, and visited the long anticipated ruins of Palenque, then headed northeast to the beach!

(Sometimes I forget to take pictures, especially when I'm plugged into the online world. This was one of those times. Sorry.)

Have you experienced how local people live in another country?