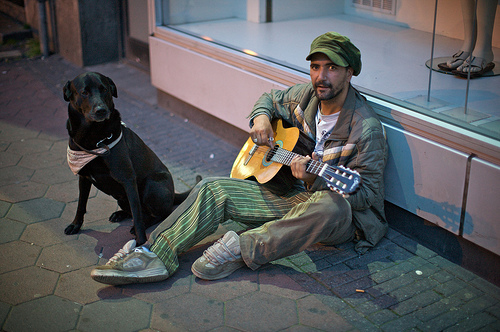 After a series of misfortunate events (which have yet to be told here) - a fender bender; stranded; dead battery; oil leak; inoperable vehicle; invasion of ants; attack of invisible biting insects; delayed bank transfers; flying clothes on the freeway; broken roof top tent; inoperable stove; stolen camera (hence the lack of pictures in this post, except for the one above snagged from Flickr); lack of showering and cleanliness, and countless other minor irritations associated with life in a Ford F250, the result was stress; little sleep; back ache; a sore neck and sickness.

As a result, the only thing I really wanted for Christmas was to be in a house.

I was exhausted. Mentally, physically, emotionally and spiritually. I was tired in both body and brain.

I just wanted a break from 'life on the road.' A nice little house, where we could spread out, shower, have running water, maybe an oven where I could bake up some Christmas goodies, would be delightful. I set my heart on it.

But there were delays. We waited for friends to arrive, to see where we would set up home base. Then the truck was acting up again. Then this, then that. Finally, we agreed to try the little beach town of Xcalac, Mexico as our 'home for the holidays' and the coming month.

Our friends already had a place arranged - three bedrooms two blocks from the beach for $300 a month. We were certain we could find something similar.

Early the morning of the 22nd, after a breakfast of fresh coconut on a red-sea beach in Mahahual, we drove the 60 km to Xcalac to find our place.

The town was reminiscent of the personality of dilapidated, sparsely populated  Caribbean locales that we'd visited in Panama. In all, it wasn't much to look at, but we were certain we could find a little place to rest our weary selves and have a little holiday cheer.

Then we found it, just as I'd imagined it would be. Lifted on stilts, with beach frontage and the polished driftwood charm of a house by the sea. It was small, but the setting was idyllic. It would be perfect.

The deck off the front looked out across the rolling, turquoise ripples of the Caribbean, and I could imagine many happy family times here over the coming month.

"Que sera, sera, (What will be, will be)" I feigned to my husband, knowing deep in my heart that my disappointment at not getting this house might be too much to bear.

It became 'our home' more each moment, as we played and rested in the solicitous shade of it's rafters. Then with four jarring words it was ripped from us forever.

We can live for a whole month on that much! No matter how great my despondency, I wasn't desperate enough to spend more than three times the going rates, or what we'd planned on, for half as much house. Disenchanted, we slowly drove away to continue our search.

From north to south, east to west, high and low we looked till the end of day, yet nothing could be found but a shack on the beach.

A literal, one-room shack, with cement floors, wood slats for walls, holes for windows, gaps in the door to let in wind and rain, no electricity or water, barren except for a hammock, a lounge chair and ramshackle table, I couldn't imagine anything farther from my ideal setting for spending Christmas.

With the sun now set, and no other options, we agreed to camp there for the night and 'try it out'. In an attempt to improve our mood, we decided to cook a hot meal on our new stove, which only resulted in a dramatic fire which nearly burned the interior of our truck.

Utterly disheartened, I began to cry. It was dark. I was tired, hungry and miserable. It had been weeks of escapades such as this, and I wasn't one bit happy about it. When was I going to get a break?

It seemed the more I fought and cursed my conditions, the more I refused to endure amicably my misfortunes, the more abundantly they were heaped on. Still I refused to acquiesce my vexation till a house was secured. Then I could rest. Then my irritations and torments would end and I could be cheerful once again.

In the midst of my internal tirade, I looked up at the stars, and thought of the one bright star that shone over 2,000 years ago.

"I wonder if Mary cried when she had to give birth in a stable," I thought to myself.

As the day follows the night, with the morning, and a meeker me, came an improved outlook.

I have been eager to change my circumstances, but unwilling to change myself. I'd been fighting fate, but the only result was personal suffering.

With a commitment to improvement, I determined to accept what the day might hold, and willingly make the best of it.

My vow is tested from the start. A decision made to leave Xcalac and look in another town is reexamined when the truck doesn't start, and I get to practice 'making the best of it.' After further adventures, Greg gets her running again, and we travel to Laguna Bacalar.

The story has a happy ending. With the fortunate serendipity that accompanies those who expect it, we immediately found comfortable camping accommodations. It wasn't the house I had set my heart on, but somehow I didn't need it anymore. We finished our Christmas shopping and experienced plentiful amounts of Christmas cheer.

That Christmas Eve, as the strains of Christmas carols rang out from the voices of family and friends, I look up at the night sky.

Like stars shining so brilliantly against the contrast of the pitch-black heavens, my blessings beamed more brightly before me when juxtaposed with recent incidental afflictions.

Love, family, friends, health, freedom, faith and hope. I have all the things that matter most. I didn't need the right accommodations to enjoy them, only a change in outlook.