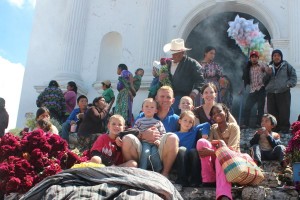 I’ve wanted to go ever since we arrived in Guatemala over a year and a half ago.

I mean, the largest market in Central America. That’s pretty cool, isn’t it?

Greg hasn’t wanted to go... at all. “It’s just another market, we’ve seen dozens of them.”

But as we prepared to leave Guatemala for good, I managed to convince him... so we went.

From Los Encuentros, we took the road heading northeast. It was windy and steep with lots of tumulos (speed bumps). The roads in the highlands of Guatemala are notoriously windy, but this one... woah, it was bad. We knew how bad it was when Aaliyah suddenly  called out, “I think I’m going to throw up!”

And then she proceeded to blow chunks everywhere.

I managed to hand a bowl to her before her ‘second round’, but by then it was all over the seat, the floor, her pants and shoes.

We’re out of the habit of this travel thing, so we were totally unprepared. No wipes, no toilet paper, no towels. Nothing.

I ran into the ‘store’ next to where we pulled over.

“Do you have any toallas (towels)?”

“Yes,” she told me, then pointed to some feminine pads. Hmmm... that’s not going to work.

So we pulled her out and dumped water on her (they did have that). It’ll have to do. Then we were back on our way. 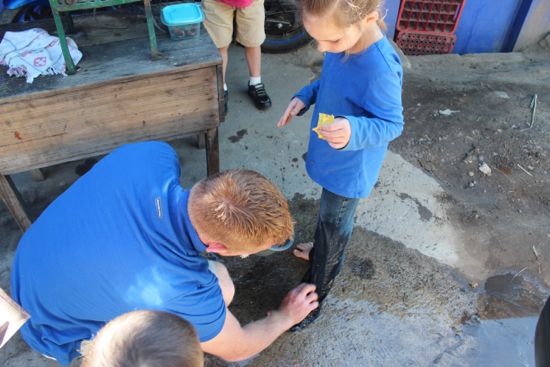 Arriving in the town of Chichi, a man waved at us then ran ahead to show us where to park... on lot was too full of pigs, another was too small for our truck. Finally he jumped on and showed us where to go. Their lot was too full for us, but they did have space on the street in front. (When we came back from the market, they charged us Q25 to park on the street! That’s a ridiculous price. We pay Q5 to park in a lot when we shop in Solola.) 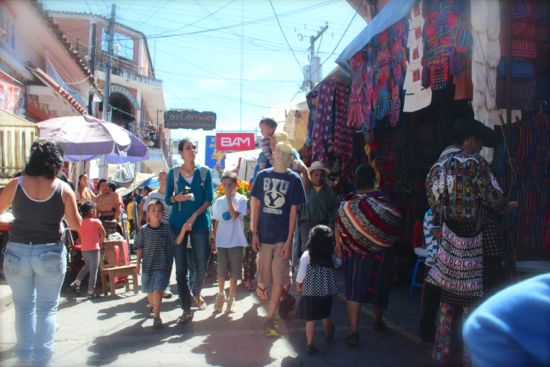 Walking into the market, I was a little worried that it was going to be just like every other market. I see many of the same knick-knacks and handicrafts that are available on Santander in Panajachel -- bags, pillow cases, quilts, table runners -- made out of discarded huipils and cortes, the traditional clothing of the Guatemalan women. 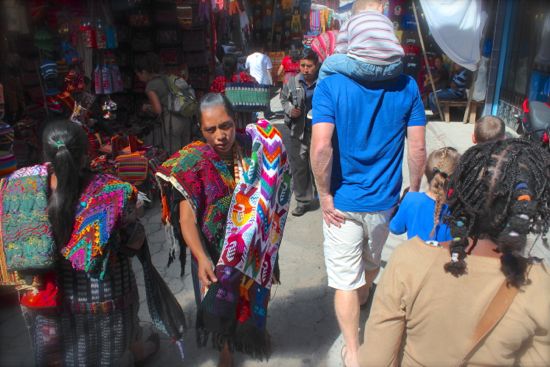 But we keep walking, and discover some novelties -- an old man selling old silver coins, another man selling ‘artifacts’ and stones, ‘miniature’ pineapples, antiques -- but most interesting of all is the people. 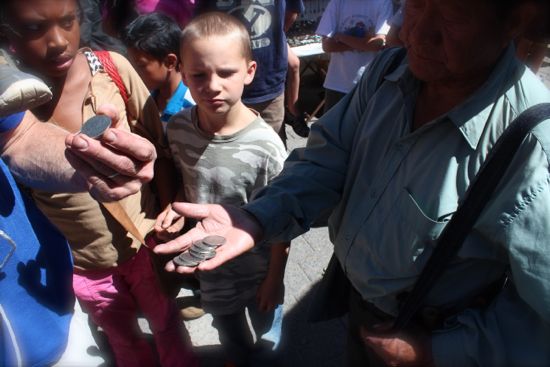 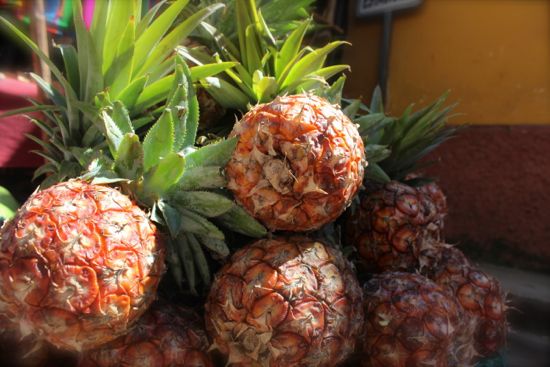 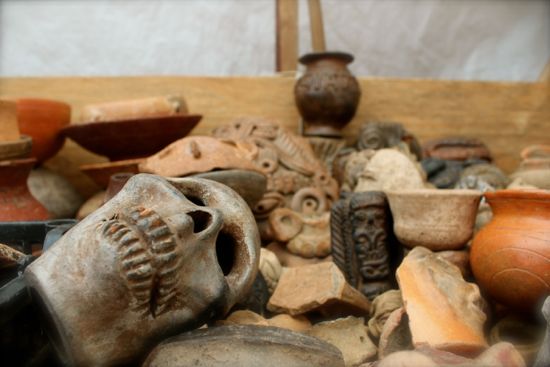 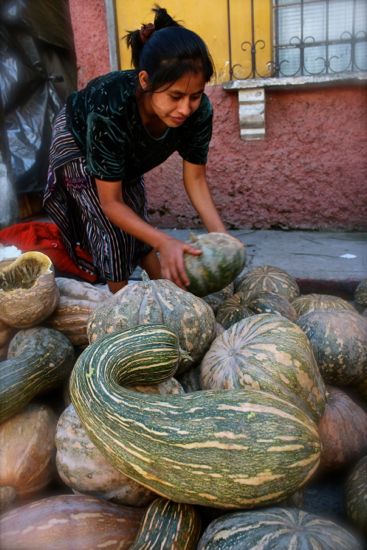 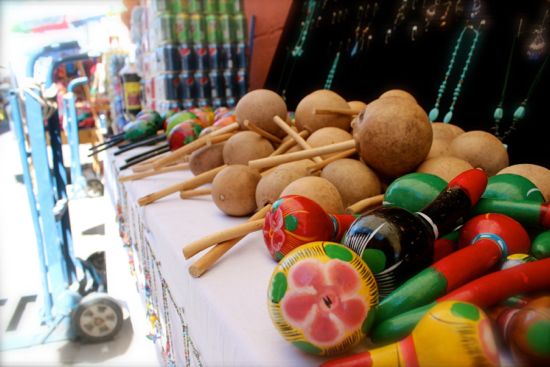 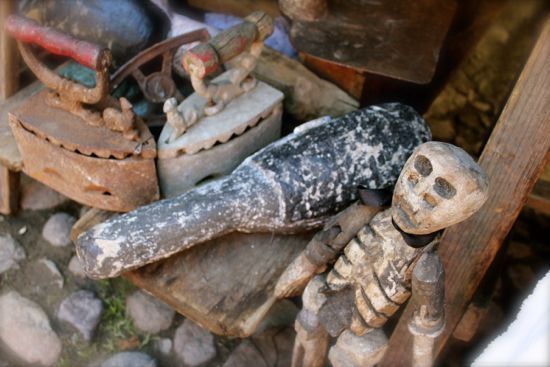 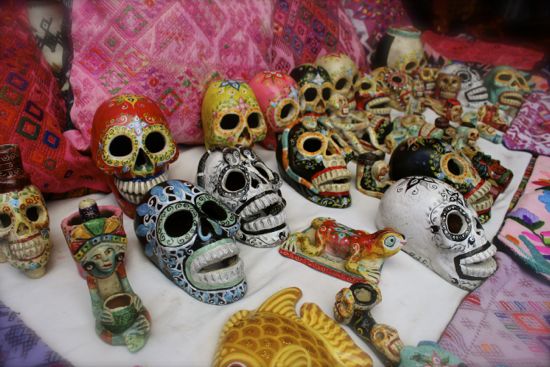 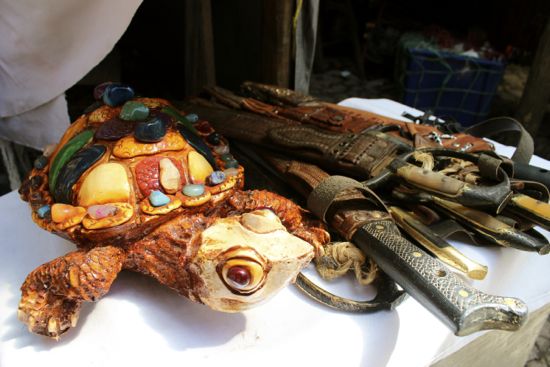 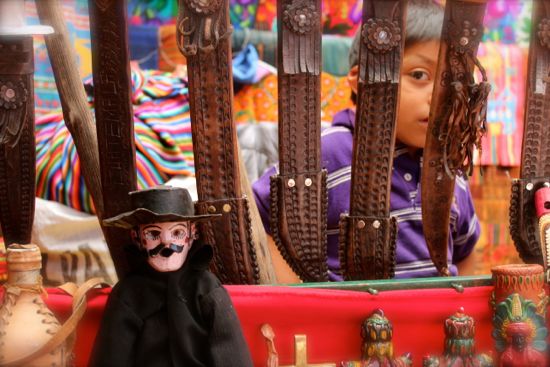 Men and women, old and young, some in tipica, others in regular clothes, sitting, waiting, selling, spending their lives, day in, day out here in the streets of Chichi.

Entire generations who’s livelihood is based on the markets of Chichi. 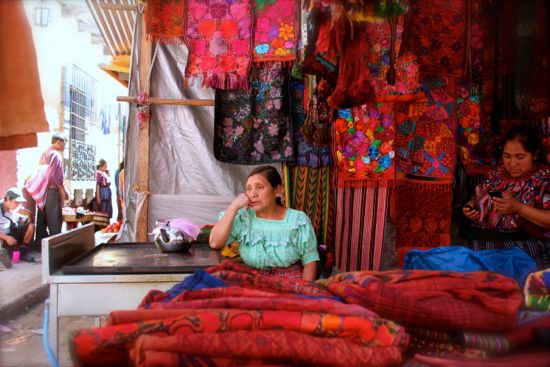 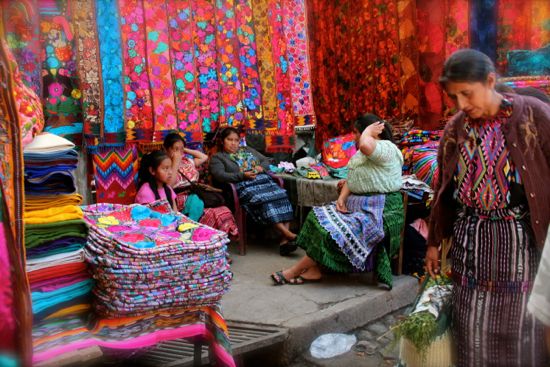 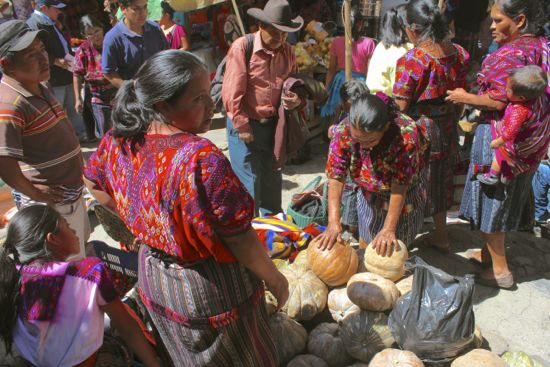 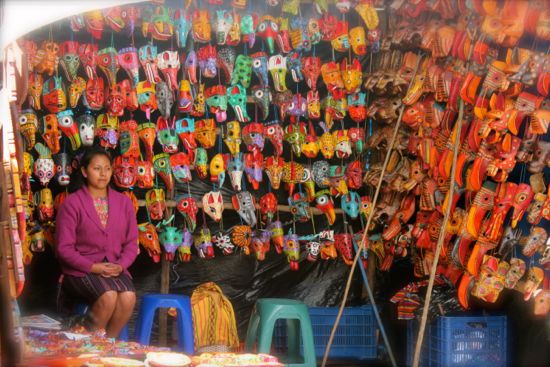 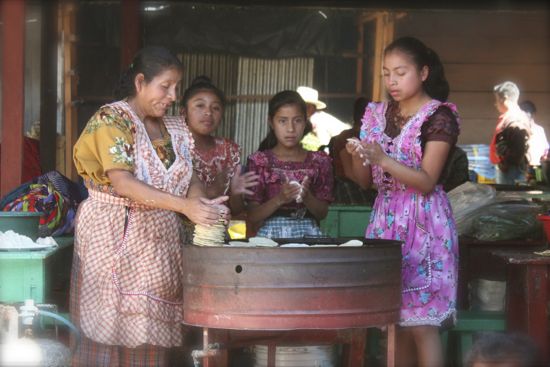 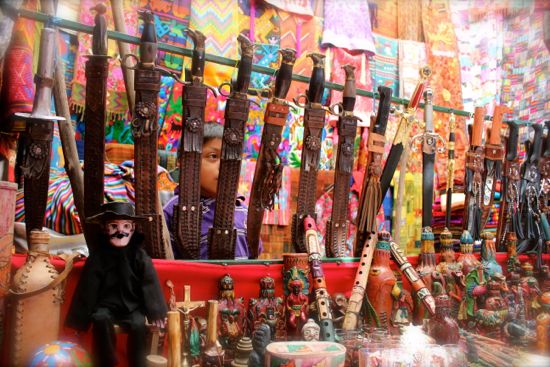 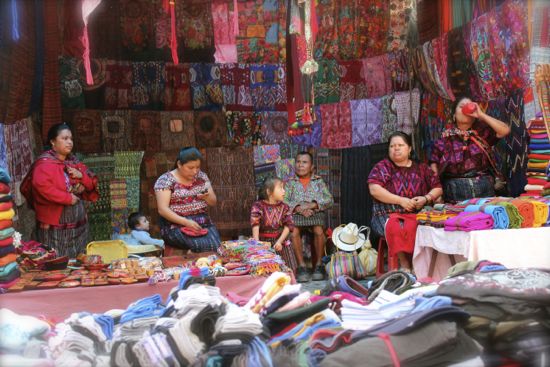 Then we came to one of the churches. Camped on the steps were men and women selling flowers. At the base of the stairs, and at the church steps, incense was being burnt and offerings were being made. 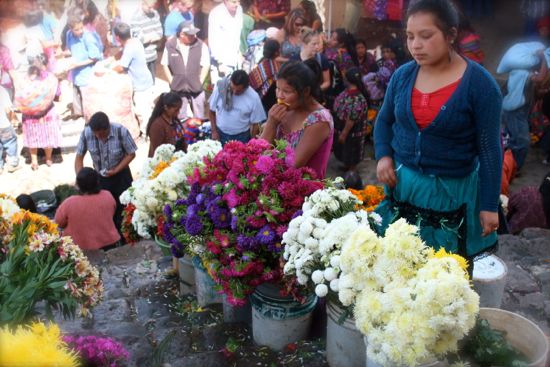 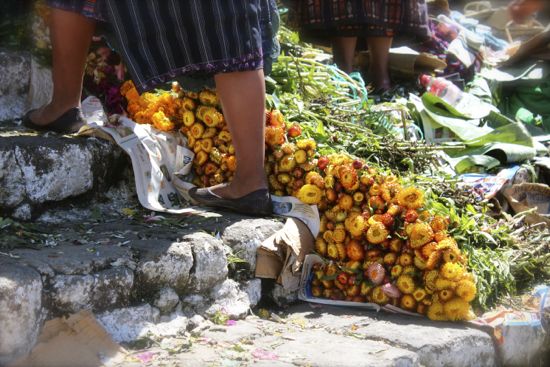 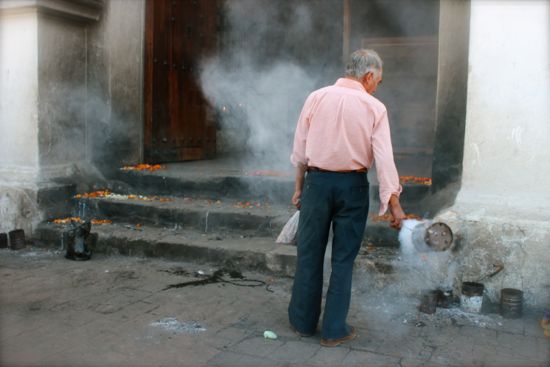 As we stood on the steps and watched the people, Greg said, 'This is really cool! I love this stuff. It makes me want to travel more!" (Oh good, our trip to Chichi wasn't an entire waste 😉 )

Inside, men and women were praying. One woman approached me an offered a tour, explaining that the altars in the walkway were offerings to the Mayan gods, the rest of the cathedral was typical Catholic, devoted to the Saints and Christ. It was an interesting mix of multiple religions. 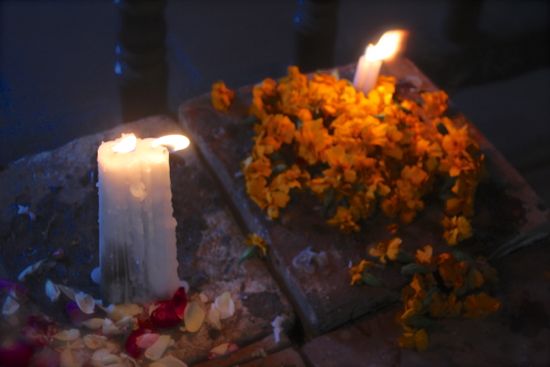 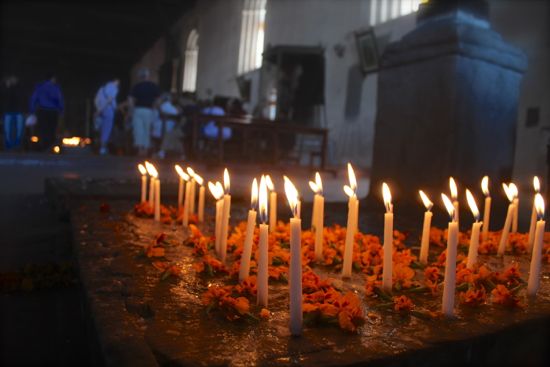 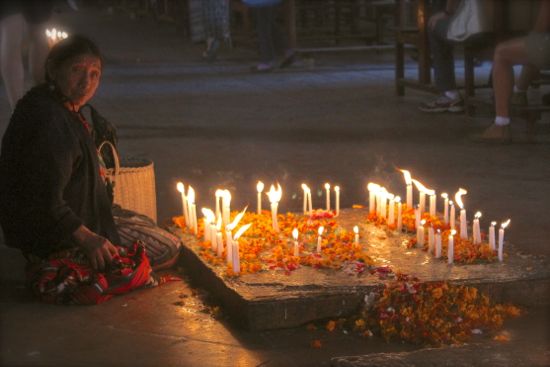 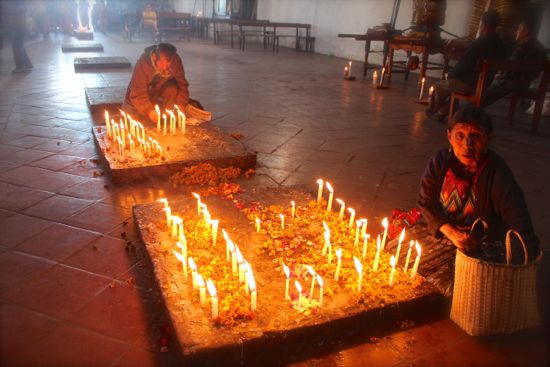 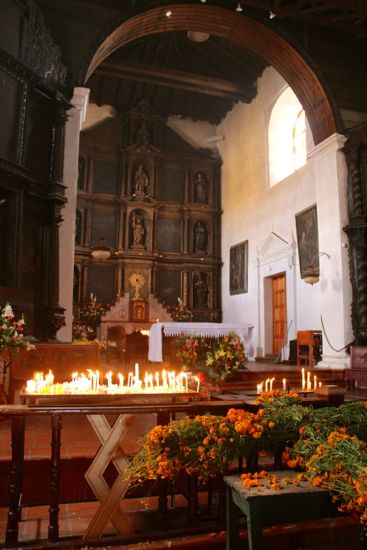 After exploring the church we had to find a bathroom (of course). We drank some cold coconut water, then bought some popsicles before leaving. Our stay was short. We have to get back to prepare for a big trip. 😉

[message type="custom" width="100%" start_color="#FFFFFF" end_color="#FBF8FF" border ="non" color=""]* Congrats! You made it to the end. If you liked this post then you'll love our book! Don't forget to 'share the love' and inspire others.[/message]