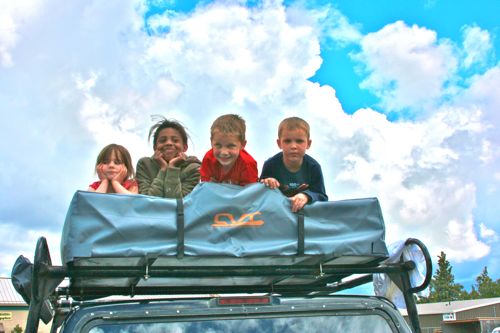 With our new roof top tent from Cascadia Vehicle Tents

So here's the scoop.

Yes, just Saturday we were sitting in sunny California, sharing two fun days with Adam, Courtney and Milligan Baker (from ManvsDebt.com. Watch for some video interviews of our time together - coming soon).

After dinner, at around 8:00 pm, we took off and headed east toward the Beehive State.

We drove late into the night, pulled over in the middle of the Nevada desert to (attempt) to catch a few ZZZ's, then pressed on to grandma's house.

But we altered those and came straight to Utah because:

1) The front right tire on the truck is wearing weird. We had to replace the tire already, because it had worn nearly bald after 3,000+ miles of driving. But we still need to find the cause and get that repaired. We wanted to do that at a place where we could chill at grandma's house.

2) Since we're "moving" some of our stuff from Alaska to a storage shed in Utah, we're pulling a trailer and have extra stuff that we won't be taking on our entire journey. We're really tired of it all...so we hurried here so we can drop all our extra baggage.

So how will be be spending our month or two hiatus here to help us prepare for the remainder of our lengthy voyage? Here's what we'll be working on: