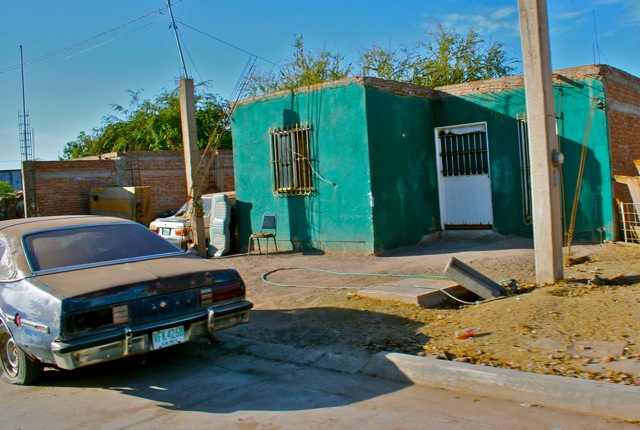 Wandering in the heart of Los Mochis, Mexico

After an exciting bodega experience, we return to our musty, dingy, poorly lit motel room to further inspect where we'll actually be staying.

I've mentioned before, this is my first rodeo. It's my first experience staying in accommodations that were... 'sketchy.'

The only other time I'd left the U.S. was when I'd traveled to Tijuana, Mexico, and it gave me culture shock.

Now I was face to face, and nose to nose with sleeping arrangements that were a little 'uncomfortable' to me.

The single outlet in the room that stands about halfway up the wall is very odd to me. I utter an incredulous gasp when I 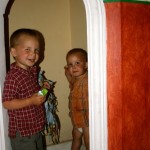 What is this for?

discover the beds are really cement pedestals with foam pads. And I'll never be able to bring myself to lay on those sheets.

And the smell...what is that anyway?

Children are so adaptable. That's one of the qualities that makes them great travelers. They hardly blink an eye at our surroundings- in fact they find them fun and exciting.

A little cubby hole below the t.v. in the wall, seems to serve no other purpose than to entertain my children, which it does perfectly.

The kids eventually wind down and fall asleep on our concrete beds. I doze for a little while, after spreading out my own sheet.

It's too hot for a blanket, despite the attempt of a swamp cooler, which only seems to be increasing the mustiness of the air.

At 3:00 a.m. I'm up writing, and kept company by the radio blaring from the guard's station next door. Perhaps loud music keeps him from dozing while he keeps the premises under surveillance.

I was startled when he turned it on. Baffled really. Who plays the radio loud at 3:00 a.m.? I've got to remember I'm not in Kansas anymore. 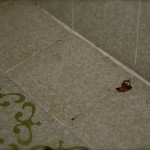 And thus it was named 'roach motel'

We're eager to leave the next morning, after a stale, sleepless night.

My husband is adventurous enough to shower, but not before he removes the remains of a deceased resident who is legs up on the shower floor.

Stepping out for some fresh air, I'm unpleasantly surprised to find the smells out-of-doors are worse then in.

After check out, we search for a gas station to get some orientation. We'd like to locate an internet café, and a church to attend, since it was Sunday.

A friendly señora can't help us find a church, but she gives us directions to an internet café.

Following her instructions as best we can, we're led through a tour of the 'real' Mexico.

When you first experience a place so entirely foreign and unfamiliar, why is it that you feel a bit nervous and uncertain?

Is it fear? Are we afraid of what we don't know, or are unaccustomed to ?

What do we imagine might actually happen? Do we think the people who inhabit such aberrant dwellings(according to our standards), might be dangerous, or wish us some harm? 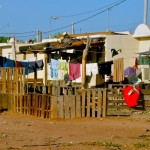 I wrestle with these feelings, not willing to fully explore them or what they mean.

Torn between staring in order to learn more about how these people live, and wanting to be respectful 'intruders', I settle for sneak peaks, while trying to maintain an unassuming demeanor.

Winding through roads that vary from paved, to partially paved, to dirt, I snap shots from the window of red, blue, yellow and white clothes as they hang from the line in the 'backyard' of a home that is fenced with wooden pallets.

As we pass through neighborhoods I'm astonished at their deviation from the 'norms' of American suburbia with perfectly manicured lawns, evenly shaped sidewalks and driveways, and their unduly demanding HOA's.

I'm so fascinated by it all, craning my neck in every direction and dumbfounded by my first real look at 'the world' outside my little corner of the Earth.

We still haven't found the internet café, but reaching a significantly sized road that appears to be a main highway, we decide to make for Mazatlan.

Picking up speed, we start cruising toward highway speed. When what to our wondering eyes did appear? A dead end.

Stupefied, I'm at a loss for words. Does this very large and apparently well maintained road really go nowhere? This substantial slab of concrete was constructed to lead to a field? It's almost comical really.

Amused and bewildered, we did the only thing we could do - turned around the direction we came. I'm thoroughly entertained.

So many deviations from normality - there's something appealing about it. It adds variety, amusement and unpredictable fun.

The hilarity continues and I laugh aloud this time, enthralled in the adventure of abnormality, when I spy a bloated, dead horse lying roadside.

What will we discover next?