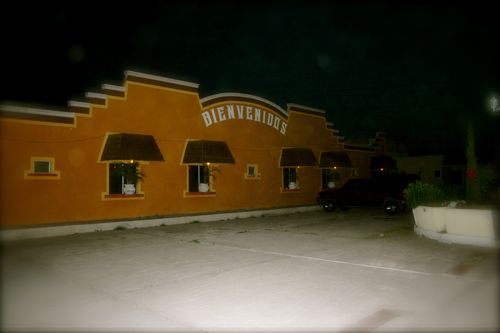 The first hotel we find says 'Welcome' but I'm wary.

"We've been driving forever!!!" our four children scream in frustration. It had been a long day of travel.

After making a few travel mistakes, we choose the first motel we come across out of pure exasperation.

It's not very promising. Or inviting. 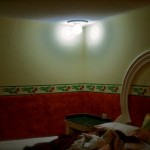 Honestly, it's a little bit scary.

The hotels we've stayed in the past few nights have been comfy, even luxurious. They were major chains or tourist resorts.

But we don't have many options. It's almost dark, the center of Los Mochis is still far, the kids sooooo want out of the car, and they really want food, which we don't have.

Checking in, we unpack our belongings and inspect the sleeping quarters. The kids are famished and are crying, whining, and begging for food.

There are no restaurants nearby, so we decide to search for a grocery store.

Bribing the children with a bag of M&M's, we convince them to climb back in for a 'short drive' (or so we hope).

But that drive is getting longer, and longer. The traffic is getting worse and worse. The kids are whining more and more. And we've reached the end of our travel rope.

We deftly park, grab a cart, load in the kids, and head inside.

It's 'shopping hour' in Los Mochis, Mexico and nearly every resident in a 10km radius must be at the bodega.

Attempting to maneuver our clan through the crowds, we get more than a few stares.

I suppose we look a little strange- a red-headed, freckled white man with a screaming boy on his shoulders, pushing a cart with his screaming 'twin', a dark-skinned little girl on a leash being held by a white women holding an overly chubby baby (who receives an awful lot of cheek pinching from multiple admirers.)

It adds to my stress level - no mom likes being watched when her kids are on their worst behavior. 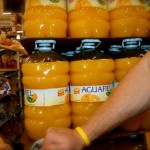 Look at the size of that OJ

Wandering the isles like halfwits, dazed and confused by the unfamiliar offerings - like drinkable yogurt and 'orange juice' in jugs the size of watermelons -its as though our frazzled frustration has fried our brains.

We can't even decide what to get. The constant whining doesn't help either.

Finally locating the deli, all that is left was some stale fries, overly dry buffalo wings, and some decent chicken nuggets - we'll take the nuggets.

We also discover some bread, deli meat and cheese.

Lets get the heck out of here!

Just When You Thought...

As we check out, I spy a taco cart across from the checkout stands. Food we can eat right now would be a much better option!

I sneak across to ask if they're still open.

I give Greg the thumbs up, and he goes to put the groceries back with the kids while I wait in line to order, grateful to finally get some grub.

It's my turn and I order from the overhead menu 'Dos burritos.' 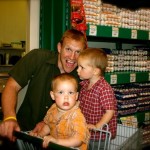 Just get us food!

Now Greg's by my side, I relay what was said.

"What do you have?" he asks in Spanish.

"We have nachos. Without cheese."

What is this, Nacho Libre?

The 30 Seconds That Made the Difference

That should have broke the camel's back.

Instead, I imagine what a funny travel story this will make. I picture telling it to friends and family.

Then I turn, look at Greg, and we bust a gut for at least 30 seconds.

I wait at the checkout with the kids, while he rounds up our previously planned purchases, this time we both have smiles on our faces.

Back in the car those sandwiches and cold nuggets taste pretty darn good.